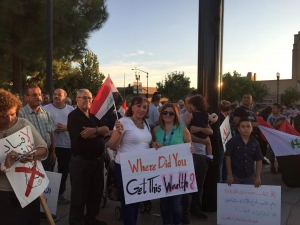 August 19, 2015 (El Cajon)—About 250 to 300 Iraqis from multiple religions and beliefs united in a demonstration in El Cajon on Saturday, standing in solidarity with people across Iraq who have taken to the streets to demand governmental reforms.  Mass protests in Iraq followed a cut-off of electricity amid sweltering heat. 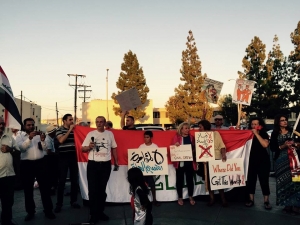 In El Cajon, demonstrators at the rally organized by the Iraqi Democratic Current chanted the same phrases as in Iraq, calling for a return to secularism and an end to corruption. “Where did you get the wealth?” a sign carried by one local woman read.

Camilia Sadik, a linguist who formerly worked in Iraq, gave a one-sentence speech: “My religion is Iraq, my sect is Iraq, and my nationality is Iraq.”  She told  East County Magazine, “The reason I said that was to bring the feeling of unity among all Iraqis.”

The protests in Iraq have made an impact.  On Sunday, the Associated Press reported that Iraqi Prime Minister Haider al-Abadi cut 11 cabinet members—a third of his entire cabinet in response to the mass protests.  His office says it will eliminate four ministries including human rights and women’s affairs, consolidating others.

Those moves come after the Parliament last week eliminated the nation’s three vice presidencies and three deputy prime ministers.  The structure was set up after the U.S.-led invasion of Iraq back in 2003 which ousted dictator Saddam Hussein and was meant to balance representation of Shiites, Sunnis and Kurds.

Iraq’s Supreme Judicial Council has announced it will hold a special session Monday to review the proposed reforms, AP reports.

In El Cajon, a man named Kusay spoke, stating he believes al-Abadi is heading in the right direction because he began with reforming the judicial branch, without which nothing else can be achieved. He also criticized the American media for not covering Iraq’s major news, stating, “Shame on you, American media.”

The positions slashed by al-Abadi include former Prime Minister NuriKamal al- Maliki, who is implicated in a report by the Parlimentary Committee for Security and Defense. The report blames Maliki and other officials for the fall of Mosul to the Islamic State, or ISIL, CNN reports.  Al-Abadi also announced approval of military tribunals for officers accused of abandoning their posts and weapons, allowing Ramadi to fall to ISIL.

Sadik believes the Bush-Cheney administration deserves much of the blame for the collapse of Iraq over a decade ago and the conditions that gave rise to ISIL.. She contends the first Iraq war was started to make money for private contractors including one with ties to Vice President Dick Cheney, a company in which Sadik says she saw grossly inflated profits and corruption.  While she praises American soldiers who today are working with Iraqi forces to help defeat ISIS, she fears that history may repeat itself as she hears the hawkish statements made by some conservatives today.  She carried a sign in the rally which read: 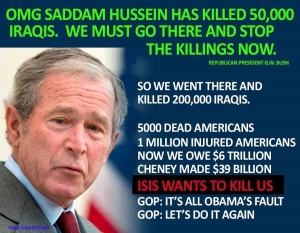