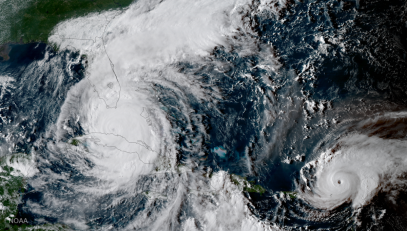 September 10, 2017 (San Diego) – Measuring 400 miles wide with winds still up to 120 miles an hour, Hurricane Irma has slammed into the Florida Keys and Florida’s Gulf Coast.  The storm that began as a powerful category 5 hurricane first devastated islands across the Caribbean with winds up to 185 mph, before striking Florida as a still-strong category 4 hurricane.

High winds have knocked out power to nearly 3 million homes and businesses statewide, Reuters reports.  The hurricane has sucked water out of harbors and send storm surges up to 15 feet high rushing through populous areas, causing flooded streets and swaying skyscrapers in Miami.

The storm has also spawned tornados, twisters adding to the havoc as power lines and trees have toppled, roofs have been ripped from structures, and residents who defied evacuation orders have hunkered down to weather the storm.

In the Caribbean, Irma has killed at least 39 people.  President Donald Trump has issued an emergency declaration for Puerto Rico as well as Florida.  The declaration authorizes the use of federal funds for the counties of Charlotte, Collier, Hillsborough, Lee, Manatee, Miami-Dade, Monroe, Pinellas and Sarasota.

The Federal Emergency Management Agency announced that the assistance can include grants for temporary housing and home repairs, low-cost loans to cover uninsured property losses and other programs to help individuals and business owners recover from the effects of the disaster,

Irma has weakened to a category 2 but is still capable of deadly impacts.  It has veered northwest and is forecast to bring heavy rainfall of up to 20 inches, high winds and storm surges to Georgia.  Parts of Alabama, Tennessee, North and South Carolina will also be impacted, the National Weather Service predicts.

On the heels of Irma is Hurricane Jose, now a category 3 hurricane in the Caribbean that could strike areas previously deluged by Irma.

If you wish to donate money to help survivors of Hurricane Irma, here are two responsible charities raising money specifically for relief in this storm:

For the latest hurricane and tropical storm watches and warnings, visit the National Hurricane Center at http://www.nhc.noaa.gov/.