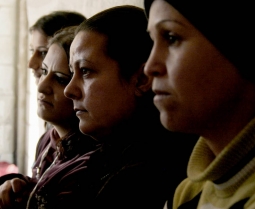 Trials by ISIS underway as some captives reportedly freed; local Chaldean leaders speak out on crisis

March 1,2015 (San Diego’s East County) – Fears mount for hundreds of Assyrian Christians taken captive by ISIS last week, amid reports that the self-proclaimed Islamic State militants are putting hostages on trial, though some reports indicate that a handful have been freed.

The captives are reportedly being tried by an ISIS court for purported ties to militants fighting ISIS extremists, including joining with Kurdish Peshmarga fighters,  according to an article in International Business Times published today.

Associated Press reports that 19 of the Christian captives have been freed, according to multiple activist sources.  The Middle East publication Hareetz confirms some captives have been released though estimates vary from 19 to 28.

Those found guilty of fighting against ISIS (also known as ISIL), however, are expected to be executed.  Concerns have also been raised that some captives could be enslaved, as ISIS has done with other young women and girls that its militants have kidnapped.

Reactions have been swift. The U.S. launched additional airstrikes on ISIS after the hostages were seized, the Global Post reports.   At the Vatican, Pope Francis led a prayer for the abducted Christians, “These sisters and brothers who suffer for their faith in Syria and Iraq," U.S. News reports.  The Pope promised that the victims would not be forgotten.

Here in San Diego’s East County, home to tens of thousands of Chaldean and Assyrian Christians from the Middle East, opinions are divided as to what approach should be taken to save Christians in Iraq and Syria.

Chaldean-American spokesman Mark Arabo announced a trip to Washington D.C. early next week to meet with White House officials and discuss the crisis.  Arabo says reports on the ground indicate as many as 300 may have been taken hostage.

“I fly to Washington D.C. this coming week with the weight of hundreds of abducted Christians on my heart,” Arabo said in a press statement released Friday.  “The longer our country continues to be unresponsive to the threat of ISIS, the greater their reach becomes. The indifference shown by the White House, and members of Capitol Hill is a death sentence to my people.”

In an earlier statement on February 24, Arabo said he held a phone call with White House Director for Iraq Andrew Kim, calling for swift and effective protection for religious minorities throughout the Middle East.

Arabo  says his White House meeting will focus on a two-stage priority laid out by Obama administration officials, including improving security with locally based governments and militias fighting ISIS as well as facilitating reentry of the State Department into northern Iraq to process some 30,000 visa slsots available.  But he believes more must be done to protect religious minorities from ISIS.

“The genocide of Christians persists in the region,” Arabo concludes, “and without action from the White House, we face the extinction of a people throughout the Middle East.”

But Ben Kalasho, president of the San Diego East County Chaldean Chamber of Commerce, has a different perspective.  “I think that Obama has proven to be an astute military strategist,” Kalasho told ECM todady. He added that he supports air strikes and drone attacks on ISIS, but would oppose  sending in U.S. troops.

Instead he hopes to see more Arab nations such as Jordan join in combating ISIS, as well as more shared intelligence including with Israel.

Kalasho, in an editorial published in East County Magazine, calls for unity among bickering Christian factions to confront the crisis posed by ISIS – a crisis that echoes genocide a century ago that resulted in the slaughter of hundreds of thousands of Christians in the region. He echoes Churchill in warning that those who fail to learn from history may be doomed to repeat it.

“ Assyrian, Chaldean & Syriac communities must use this moment in history to break down barriers put up by our own religious factions and so called leaders,” Kalasho states in his editorial, an open letter to Chaldeans, Syriacs and Assyrians worldwide.  “I felt compelled to write to you today as urgent as the need to breath or drink water. Seize the moment, the world is watching,” he urged.