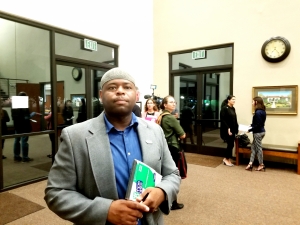 October 3, 2018 (El Cajon) – Members of CAIR , the Council on American-Islamic Relations, called on Cajon Valley Union School District members  at the September 25th board meeting to  fire former Greenfield Middle School’s principal, Gregory Calvert over his handling of the alleged bullying of a Syrian student.  Calvert has since taken a position as assistant principal at Chase Avenue Elementary in the same school district.

On March 20th, a schoolgirl was allegedly followed home by students and attacked for being Muslim. The student, referred to only by her first name, Sidra, is a refugee from Syria.

Yusef Miller, an Escondido resident and a member of CAIR-San Diego, addressed the CVUSD board, calling for Calvert’s firing during the meeting. Later he told ECM, “She (Sidra) was attacked at school and followed all the way home.  She had her headdress pulled and was asked for ID.  They asked her for her citizenship. Once the girl got home, they hit her parents as well.”

Mejgan Afshan, also with CAIR, spoke before the board, and to media before and after the board meeting. Afshancalls for a comprehensive, updated school bullying policy.

Afshan told ECM that Calvert was “cold and indifferent. His neglect and insensitivity towards parents, staff, and students has happened over many years,” referencing Calvert’s alleged behavior toward reports of other bullying incidents as well as Sidra’s March 20th alleged incident.

”The whole event happened on his watch,” Afshan said of Calvert “He was moved from Greenfield to be assistant principal of another school.” 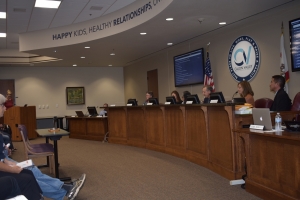 CVUSD Superintendent Dr. David Miyashiro stated that Calvert “chose to take a different assignment. Greg is a doctoral student and has small children,” he added, noting that Calvert’s new position will allow more time to study and for more family time.

“We have high expectations and all the programs on the agenda, TEDx and anti-bullying he’s  been through,“ Dr. Miyashiro said of Calvert. “We can’t discuss student or employee matters.”