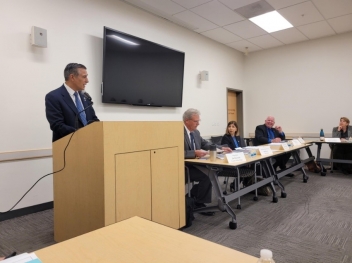 March 6, 2022 (San Diego) -- Congressman Darrell Issa (R-CA-50) formally addressed a policy roundtable that included county, state and federal officials last week, outlining his strategies and solutions to address the nation’s worsening fentanyl crisis. Fentanyl is a factor in more than half of all overdose deaths, and fatally poisons someone every eight minutes.

“Fentanyl is not a new danger. But the deadly threat it poses has now reached every corner of our country and no community is being spared,” said Issa, who called for national action to address the crisis. “Today’s conversation was both informative and emotional, and highlighted just how monumental the fentanyl challenge is for all of us.”

Congressman Issa is also a cosponsor of the Halt All Lethal Trafficking of Fentanyl (HALT) Act, which would permanently classify fentanyl as Schedule I, in the same category as LSD and Ecstasy, and remove regulations that stifle research on other Schedule I substances.

“At the federal level, we are taking action and developing the legal framework that simply does not exist at this time,” said Issa, who also called for stronger border security to reduce access to fentanyl.

Though Issa faulted the Biden administration on border security, the Washington Post reported on March 2 that the border wall built by the Trump administration has been breeched over 3,000 times, highlighting the complexity of the problem.

An amount of fentanyl the size of a grain of sand can deliver a lethal dose.  Drug dealers have laced street drugs ranging from counterfeit painkillers to heroin and methamphetamines with fentanyl, often with deadly results.

Darrell Issa is the Representative of California’s 50th Congressional District. The district encompasses the central and northeastern parts of San Diego County and a portion of Riverside County, including the communities of Fallbrook, San Marcos, Valley Center, Ramona, Escondido, Santee, Lakeside, El Cajon, Temecula, and the mountain and desert areas of the San Diego-Imperial County line. Issa served as the Chairman of the House Committee on Oversight and Government Reform from 2011-2015.

A comment was removed for violating our site rules requiring civility.  I tried emailing the poster but the email bounced.

People are free to criticize elected officials but please avoid crude remarks that are not family friendly.