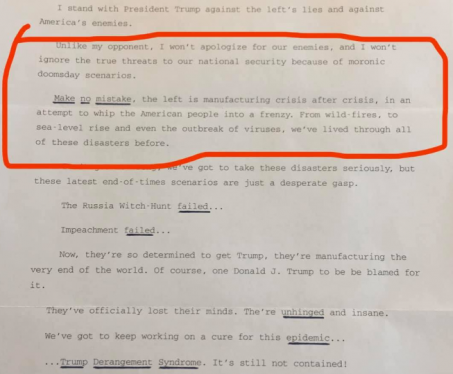 By Miriam Raftery
March 18, 2020 (San Diego) — Weeks after the COVID-19 virus had begun rapidly spreading around the world, Darrell Issa, the Republican nominee running in the 50th Congressional district, sent a March 4 fundraising letter in which he accused “the left” of “manufacturing crisis after crisis” including climate change and “the outbreak of viruses…”

He claimed the real epidemic is “Trump Derangement Syndrome.”

His actions ignored the urgent advice of the U.S. Centers for Disease Control, World Health Organization, and other top health officials.
Issa, a former Congressman, is running to fill the seat left vacant by the resignation of Republican Congressman Duncan Hunter, who has been sentenced to prison after pleading guilty to a conspiracy to steal a quarter million dollars in campaign funds for personal use.
Issa is running against Democrat Ammar Campa-Najjar, who earlier this week urged that the military be mobilized to build hospitals and that factories be ordered to ramp up production of critically needed supplies such as ventilators and masks.
President Donald Trump earlier this year also suggested the virus was a hoax during a campaign rally, but has since recognized the severity of what is now a global pandemic.
The President today announced he is mobilizing the military, as Campa-Najjar proposed, to take action to combat the COVID-19 virus that has put the U.S. and many other nations on virtual lockdown with borders closing, schools and restaurants shut down, seniors sheltering in place and most workers telecommuting or out of work completely.
Thousands of cases have been diagnosed in the  U.S. and more than 100 Americans have died as health officials warn that hospitals will soon be overwhelmed with critically ill patients unless more is done quickly. The President’s orders today aim to help address that situation and save lives.

and it's entirely acceptable to highlight his other faults which continue to make him ineligible for high office. Of course some readers will continue make irrelevant charges because they can't stand the truth. Who are they paid by??
Do I blame Trump for the federal government's inexcusable lack of response to the Corona virus? Of course not. I blame people like 8East for putting an absolute moron in the White House. Should we elect another moron to be our representative in congress? Oh, why the hell not.
for a $1 trillion Coronavirus relief and economic stimulus plan that would include industry-specific bailouts and payments to individual taxpayers that put to shame Barack Obama’s Troubled Asset Relief Program of $700 billion in 2008 to tackle the financial crisis where the money went entirely to bail out of big banks and auto companies. The Families First Coronavirus Response Act was signed into law yesterday.
This entire Op-Ed is nothing but an endorsement by you, of Campa-Najjar. The fake news regarding Trump calling the virus a hoax has already been debunked on multiple Left-run fact checking sites, yet you're still pushing the story. You're a true Liberal, Miriam - Never let a good crisis go without finding a way to politicize it!

Any further claims that Trump didn't characterize the seriousness of this virus as a hoax perpetrated by Democrats will be deleted. This is no time to spread falsehoods.

It is not an endorsement of any candidate to educate the public on statements by those in the race.