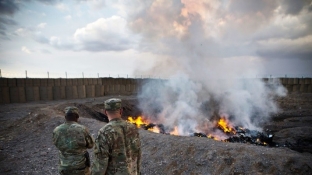 March 5, 2022 (San Diego) – On his website, Congressman Darrell Issa (R-San Diego) calls himself a “proud veteran” who served as a U.S. Army Captain. But this week, he voted against HR 3967, a bill to make Iraq and Afghanistan War veterans eligible for medical coverage of conditions due to toxic exposures, such as those released in burn pits.

The Honoring Our PACT (Promise to Address Comprehensive Toxics) Act passed the House of Representatives by a 256 to 174 vote.  The yes votes included 222 Democrats and 45 Republicans. San Diego has many military veterans, and our region’s other four representatives all voted in favor of the measure: Sara Jacobs, Mike Levin, Scott Peters, and Juan Vargas, all Democrats.

Iraq and Afghanistan Veterans of America (IAVA) praised House passage of the measure and urged Senators to also approve the bill, which President Joe Biden has indicated he will sign.

IAVA’s press release states, “This legislation will help the many thousands of veterans suffering from military toxic exposures, such as burn pits, who have inadequate access to VA benefits. It is comprehensive legislation that will address the needs of veterans that are suffering from toxic exposure by ensuring that they have the healthcare and benefits that they deserve.

“Half measures and anything short of comprehensive toxic exposure legislation would leave this issue unresolved, leave countless veterans responsible for continuing to fight their government for what they were promised, and leave a gaping self-inflicted wound to continue to kill those who served their country,” said IAVA CEO Jeremy Butler. “We must ensure that veterans finally see comprehensive legislation enacted that addresses the most widespread injuries of the post-9/11 wars. Congress should act expeditiously to enact the Honoring Our PACT Act now.”

Burn pits were used to incinerate and burn waste, hazardous material, and chemical compounds at military sites throughout Iraq and Afghanistan. A 2020 member survey by the advocacy organization Iraq and Afghanistan Veterans of America found that 86% of respondents were exposed to burn pits or other toxins, CNN reports.

Below is the bill summary from the House:

This bill addresses health care, presumption of service-connection, research, resources, and other matters related to veterans who were exposed to toxic substances during military service.

The bill provides eligibility for Department of Veterans Affairs (VA) medical care to veterans who (1) participated in a toxic exposure risk activity (a qualifying activity that requires a corresponding entry in the Individual Longitudinal Exposure Record), or (2) served in specified locations on specified dates.

The bill establishes within the VA the Formal Advisory Committee on Toxic Exposure, the Science Review Board, and the Working Group to assist with the various procedures in establishing or removing presumptions of service-connection.

The bill modifies or establishes the presumption of service-connection for certain conditions or purposes for various groups of veterans.

Among other requirements, the VA must

just goes to show issa needs to be in jail!!! shame on him for NOT supporting our veterans!!!!