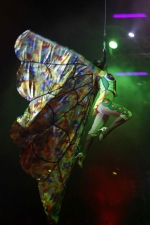 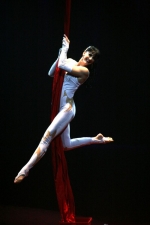 WIN FREE TICKETS!  Sign up for a free subscription to East County Magazine before Feb. 25 and enter a drawing to win free tickets! 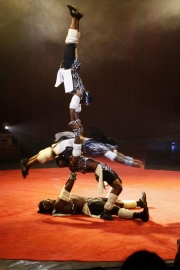 Highlights of this year’s show include the Zindunu Brothers (an African acrobatic troupe), a Rolla Bolla tango production, the Garcia family performing in a “globe of death”, the flying Tabares trapeze artists, the Marinellis performing on trampoline, Getti Garcia (a belly-dancer/hula hoop artist), Aerial Angel Danielle Espana, and other acts.

Arrive early for the pre-show:  Ringmaster Jon Weiss invites children of all ages into the center ring to experience what it’s like to be part of the show. Last year, ECM reviewed this circus and noted the delighted reactions of children trying their hands at juggling, feather balancing and hula-hooping.
Unlike some circuses which remain targets of animal rights protest groups, Circus Vargas does not feature exotic animals in its productions—no elephants or lion tamers, though you’ll find no shortage of wildly entertaining fun.

Circus Vargas was founded in 1969 by Clifford E. Vargas, who wanted to make sure that future generations could experience the magic of a circus first-hand. After his death in 1969, the circus was run by family friends for a few years. When those owners announced plans to retire and fold the show for good, Nelson and Katya Quiroga-Tabares, members of the Flying Tabares family trapeze group, took over the circus, fulfilling the performers’ belief that “the show must go on.”