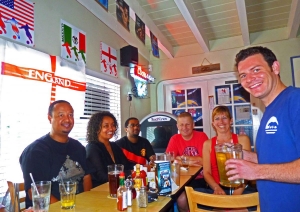 June 12, 2010 (Spring Valley) – Some might call it cheeky to hoist a British flag inside an American sports bar where other patrons are rooting for Team USA in game two of the World Cup soccer tournament. But for Santee resident Tom Middleton, watching the big match at Cali Comfort in Spring Valley today, sporting a Union Jack and cheering for the Brits seemed the patriotic thing to do.

“I’m from England,” said Middleton, a Cox Communications employee who has been living in Santee for the past 16 years.

Asked how it felt to have his co-workers and everyone else in the sports bar and restaurant rooting for the Americans, he replied, “Just fine.” 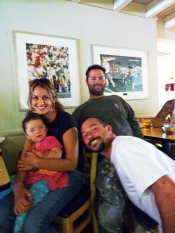 Not everyone watching the game was a die-hard sports fan. “We come here to drink. The food’s good and the bartenders are awesome,” said Doug Hele, a Spring Valley resident enjoying the event along with Chris and Nichole Madrid and their daughter, Sybella, a sports fan in training at just under two years old. “I love it – I wish I was here yesterday, when they were playing Mexico,” said Nichole.

Co-owner Corey Robinson makes everyone feel welcome—regardless of which team they’re cheering for. “We’re doing menudo for all the Mexico games,” he said, serving up a pitcher of beer to his British guest, “and we’ll have $3 Tecate beers throughout the tournament.”

Today’s match ended in a one-to-one tie—no thrill of victory, but no agony of defeat for either side. 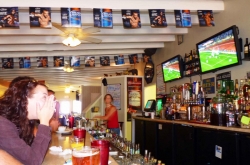 More games are slated daily. The next American match is Friday, when Team USA faces Slovenia starting at 7.a.m. Cali Comfort will be open and ready for soccer fans. “We’re doing beer pitcher specials, and specials on food, starting at 7.a.m.,” Robinson said.

Whether any Slovenians will find their way to Cali Comfort to cheer on their team, however, remains to be seen.

I always expect a good play from England.No problem England will rock in next one. :)
physical therapy richmond