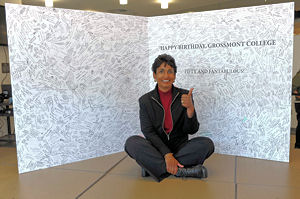 July 24, 2012 (El Cajon) -- Officials at Guinness World Records in London have confirmed that Grossmont College in El Cajon was successful in its bid to set a world record for the most signatures on a birthday card in one day. The record was set at the community college’s 50th anniversary open house held on April 14, when a total of 1,821 people signed a four-foot-tall card, including 174 well-wishers who submitted their greetings on Grossmont College’s Facebook page. The previous record was 1,468 signatures on a card in one day.
“Setting the record is like icing on the birthday cake of our yearlong celebration of Grossmont College’s first 50 years,” said Grossmont College President Sunita “Sunny” Cooke. “We are grateful for everyone’s support for our college and helping us set the record. Here’s to the next half-century of excellence in serving our community.”
The signatures had to be posted during the five hours of Grossmont’s open house, held from 9 a.m. to 2 p.m. A team of about 25 volunteers helped with registration and served as witnesses as they followed meticulous procedures laid out by Guinness World Records. They also kept tabs of the greetings posted on Facebook.
Cooke said the official certificate from Guinness will be on display at a prominent location on campus when fall semester classes begin Aug. 20.