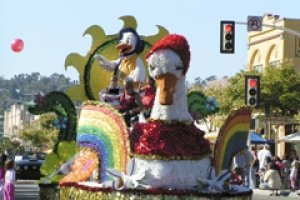 September 6, 2009 (El Cajon) – Organizers of the Mother Goose Parade have voted to save East County's most cherished holiday tradition, after an outpouring of community do nations raised enough to cover a significant portion of the costs, East County Magazine has learned.

“The parade will be scaled down to reduce costs,” Monica Zech, spokesperson for the City of El Cajon, confirmed in an e-mail. Donations are still needed, she said, adding, “Thank you to those who have already donated—especially the children who have sent in their own donations to help save the parade!”

The 67th annual Mother Goose Parade will be held on November 22, with Cox Cable as title sponsor. Names of the Grand Marshal and other participants have not yet been announced…with one notable exception.

Celebrity impersonator Sam “Captain Jack” Sparrow, a Johnny Depp look-alike who commandeered the El Cajon City Council meeting recently to draw attention to the need to raise $350,000 to prevent cancellation of this year's parade, thanked supporters on his Facebook page for standing behind him and encouraging him in “staying the course to a dream” for the sake of the children and charities that benefit from the parade.

Then he disclosed, “Unfortunately I have to announce that...YOU WILL BE SEEING MY UGLY MUG IN THE MOTHER GOOSE PARADE.” Then he added with heartfelt joy felt throughout the community, “THE PARADE WILL GO ON!!”

Watch for details and/or make a donation at www.mothergooseparade.org.