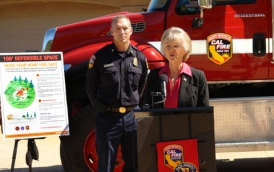 May 27, 2012 (Jamul) – On May 22, Cal Fire and County officials, including County Supervisor Dianne Jacob, gave a tour with the homeowners of a correctly cleared space around a Jamul home.  With vegetation drying out and summer drawing near now is the best time to make sure homes are protected by 100 feet of defensible space.  Cal Fire Chief, Thom Porter led the tour and provided a map of high-risk areas that have not burned recently.

Memorial Day weekend presents homeowners a little extra time to get out in their yards and work on creating the 100 feet of defensible space required by state and county law. It’s just the right time to prepare—before summer heats up and dried out vegetation around the home poses a daily fire risk. Every year, homeowners spark fires when they use power tools in the heat of summer to trim dried out plants. Waiting only makes cutting and pruning more dangerous. 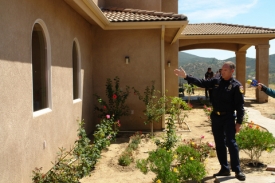 Almost every jurisdiction requires homeowners to clear dry brush from around a residence; homeowners should check with their local fire departments for regulations specific to their communities. Creating defensible space protects a home while providing a safe area for firefighters. Residents can take steps such as mowing and properly maintaining lawn and weeds, pruning or removing ignitable trees and shrubs, stacking firewood away from the home and making the home’s address visible to emergency vehicles.

San Diego County still does not have a fire department. They have a political group called the San Diego County Fire Authority but no fire department. Even though the Sheriff in recent remarks said basicly happy days are here again as his budget was increased by tens of millions of dollars for next year, the budget for local County fire districts and volunteer fire departments HAS BEEN CUT! In spite of the re election flyer from Supervisor Jacob touting her "steering" 230+ million dollars to fire protection the county only spends 15 million annually on their fire authority. When you take out the money used to support the Cal fire administrative portion, they operate the fire authority, and the money to fully fund Rural Fire, where Jacob happens to own property, there is very little left for the other small fire departments in the County. As an example Campo Fire gets $76,000.00 a year for operations expenses. Compare that to the Alpine Fire District, about the same size as Campo's department, with a 3 million dollar plus annual budget. Granted they have PAID firefighters but $76,000.00 to support a fire station and 5 pieces of equipment?

Bottom line till the citizens of San Diego County get serious about fire protection nothing will change. It has been this way forever. The BOS puts out lovely videos about the great San Diego County Fire Authority and the public never looks behind the curtain. If there is another wind driven fire like 03 and 07 the results will be the same. These fires cannot be stopped until the wind quits. The new helos will not be able to fly and all the new fire trucks will not have enough firefighters to man them. ( Even if there was enough it would not be enough. Ask someone involved, around, or burned out in 03 or 07 and they will tell you so.)

As to this article. The year after the 07 Harris fire homeowners next to neighbors who were burned out had 3 foot high weeds growing up to their back door. People who do not clear their property are stupid and stupid is what stupid does, and the new $150.00 per year "tax" from the State for "education" or the Supervisor in another press event will never change stupid.