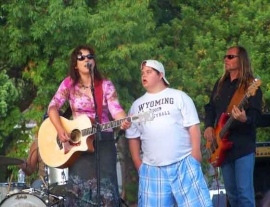 A review of Lemon Grove’s Concerts in the Park

July 23, 2009 (Lemon Grove) -- Lemon Grove’s Berry Park was filled with the summer smell of barbecue, the music of children laughing and the vision of families having fun. The occasion was Lemon Gove City’s third “CONCERTS IN THE PARK” with the country band Three-Chord Justice. Under the trees, on blankets in the grass and in lawn chairs, old and young people in the crowd were electrified by the sounds of lead singer and guitarist Elizabeth Grace and amazing steel guitar player Brennan Buttah.

They played one great country classic after another. They covered Freddie Fender (Wasted Days and Wasted Nights), Buck Owens and Johnny Cash (I still Miss Someone). It must have been the cool evening air and the warm neighborhood atmosphere, but people just had to dance. In fact the dancers even joined the band on stage and lead singer Elizabeth Grace graciously asked one adoring young fan named Chuy to sing along (photo by Leon Thompson).

To me, it was it was a remembrance of all the best things about living in America. I felt a sense of community. I bought a hot dog from the concessionaire and thought, ‘Thank you, City of Lemon Grove.’ What more could anyone ask for?

The free concerts are held at Berry Park from 6 to 8 p.m. on Thursday evenings through mid-August. The remaining concert line-up includes the Cat-illacs (vintage rock-n-roll) on July 30, Spectrum (a variety band) on August 6, with Sue Palmer and her Motel Swing Orchestra closing out the season on August 13.