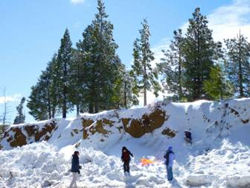 May 30, 2012 (Palomar) -- It's official!  Palomar Mountain State Park, which was slated for complete and permanent closure this July, will be permitted to stay open for the next three years as long as local citizens are willing to cover the deficit between the park's income and expenses. Palomar was one of 70 parks destined for shuttering due to state financial woes.
The agreement was finalized yesterday with the signature of Ruth Coleman, Director of State Parks. Park aides, who had been laid off due to budget cut backs, have been rehired, and the campgrounds, which were permanently closed in October due to budget cuts, have already been reopened.
Under the agreement between the Department of Parks & Recreation and Friends of Palomar Mountain State Park --- the organization spearheading the stop-gap funding --- State Parks will continue to maintain and operate the park with paid park staff for the next three years. In exchange, the association will raise money to make up the difference between the park's revenues and costs. Both parties agree that the intent of the arrangement is to keep the park running at full operation, 365 days a year, but they acknowledge that this will depend largely on how much money the association raises through contributions from the public.
Over 300 individuals, corporations and foundations have contributed the money needed to keep the park open for another year, the first in a three-year commitment. An on-going fund drive is underway to ensure the park's continued operation beyond the first year, as well as to pay for improvements to the park.
East County Magazine was instrumental in notifying community members, inspiring readers to make donations.  ECM also contacted the Anza Borrego Desert State Park Foundation and helped arrange to get a notice posted on the Anza Borrego Desert State Park Foundation website about efforts to save Palomar Mountain State Park,  boosting donations to keep the much cherished site open.
Friends of Palomar Mountain State Park is an arm of CRSPIA, the non-profit 501(c)(3) association that financially supports both Palomar Mountain and Cuyamaca Rancho State Parks. Association officials stress, however, that contributions made to Friends of Palomar Mountain State Park will go completely and exclusively towards supporting Palomar. Donations are placed in a separate account dedicated to Palomar's sole use, and without any surcharge to cover the association's overhead. The activities of CRSPIA and its Friends of Palomar Mountain State Park committee are monitored by State Parks through Nedra Martinez, Superintendent of State Parks' Montane Sector in which Palomar is situated.
For more information, contact: