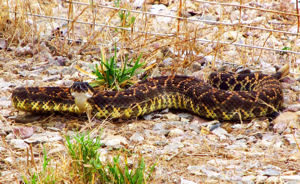 June 4, 2012 (San Diego's East County) --   As springtime calls people and snakes alike to the outdoors, encounters with snakes become inevitable. California has a variety of snakes, most of which are benign. The exception is California’s only native venomous snake - the rattlesnake.
California rattlesnake species include the northern Pacific rattlesnake (in northern California), and the Western Diamondback, Sidewinder, Speckled rattlesnake, Red Diamond rattlesnake, Southern Pacific, Great Basin rattlesnake and the Mojave rattlesnake (all found in Southern California). Though rattlesnakes are dangerous if provoked, they also provide humans with a tremendous service they eat rodents, other reptiles, and insects, and are in turn eaten by other predators. In California where rattlesnakes are found from sea level to the inland prairies and desert areas and to the mountains at elevations of more than 10,000 feet, enjoying the outdoors means learning how to avoid contact with rattlesnakes.
Generally not aggressive, rattlesnakes strike when threatened or deliberately provoked, but given room they will retreat. Most snake bites occur when a rattlesnake is handled or accidentally touched by someone walking or climbing. The majority of snakebites occur on the hands, feet and ankles.
Rattlesnakes can cause serious injury to humans on rare occasions. The California Poison Control Center notes that rattlesnakes account for more than 800 bites each year with one to two deaths. Most bites occur between the months of April and October when snakes and humans are most active outdoors. About 25 percent of the bites are “dry,” meaning no venom was injected, but the bites still require medical treatment.
The potential of running into a rattlesnake should not deter anyone from venturing outdoors, but there are several precautions that can be taken to lessen the chance of being bitten when out in snake country - which is just about anywhere in California.
Dos and don’ts in snake country
First, know that rattlesnakes are not confined to rural areas. They have been found near urban areas, in river or lakeside parks, and at golf courses. Be aware that startled rattlesnakes may not rattle before striking defensively. There are several safety measures that can be taken to reduce the likelihood of startling a rattlesnake.
Is it a rattlesnake?
Many a useful and non-threatening snake has suffered a quick death from a frantic human who has mistakenly identified a gopher snake, garter, racer or other as a rattlesnake. This usually happens when a snake assumes an instinctual defensive position used to bluff adversaries. A gopher snake has the added unfortunate trait of imitating a rattlesnake by flattening its head and body, vibrating its tail, hissing and actually striking if approached too closely.
A rattlesnake is a heavy-bodied, blunt-tailed snake with one or more rattles on the tail. It has a triangular-shaped head, much broader at the back than at the front, and a distinct “neck” region. The rattlesnake also has openings between the nostrils and eyes, which is a heat-sensing pit. The eyes are hooded with elliptical pupils. Additional identifying characteristics include a series of dark and light bands near the tail, just before the rattles which are different from the markings on the rest of the body. Also note that rattles may not always be present, as they are often lost through breakage and are not always developed on the young.
Keeping snakes out of the yard
The best protection against rattlesnakes in the yard is a “rattlesnake proof” fence. It can be expensive and requires maintenance, however. The fence should either be solid or with mesh no larger than one-quarter inch. It should be at least three feet high with the bottom buried a few inches in the ground. Slanting your snake fence outward about a 30-degree angle will help. Vegetation should be kept away from the fence since the snake could crawl to the top of an adjacent tree or shrub. Discourage snakes by removing piles of boards or rocks around the home. Use caution when removing those piles - there may already be a snake there. Encouraging and protecting natural competitors like gopher snakes, kingsnakes and racers will reduce the rattlesnake population in the immediate area. And, kingsnakes actually kill and eat rattlesnakes.
What to do in the event of a snake bite
Though uncommon, rattlesnake bites do occur, so have a plan in place for responding to any situation. Carry a portable phone, hike with a companion who can assist in an emergency, and make sure that family or friends know where you are going and when you will be checking in.
The first thing to do if bitten is to stay calm. Generally, the most serious effect of a rattlesnake bite to an adult is local tissue damage which needs to be treated. Children, because they are smaller, are in more danger if they are bitten.
Get to a doctor as soon as possible, but stay calm. Frenetic, high-speed driving places the victim at greater risk of an accident and increased heart rate. If the doctor is more than 30 minutes away, keep the bite below the heart, and then try to get to the doctor as quickly as possible.
The California Poison Control Center advises:
For more first aid information please visit  California Poison Control.

It's rattelsnake season again and now the ECO-NAZIES have outlawed the classes that train dogs to avoid rattlesnakes.
They say its cruel to the snakes and because the use a shock coller on the dogs it is no longer allowed.
Screw them. I would rather have my dog go threw this training and mild discomfort the having to bury him in the backyard because he got bit by a rattlesnake.