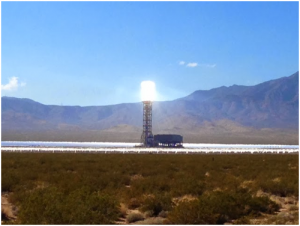 November 11, 2014 (San Diego’s East County) –Owners of Ivanpah, the world’s biggest concentrated solar energy facility, borrowed $1.6 billion from the federal government to build the project in the Mojave Desert. Now they are seeking a $539 million federal grant to pay off that debt.  In other words, they want taxpayers to pay off their loan that was also funded by U.S. taxpayers.

Just who owns Ivanpah?  Google, along with NRG, a giant in the renewable energy industry.

Julian Morris, vice president of research at the Reason Foundation, calls the proposal “an egregious abuse” that is “obscene” – particularly since taxpayers won’t receive any of the revenues the plant is supposed to generate.

Adding insult to injury, the facility failed to measure up to its predicted energy output.  In the first half of this year, the much-touted, first-of-its kind facility it has produced only about a quarter of the million megawatt hours promised.   NRG has blamed this on the weather, a curious excuse, given that California is experiencing record drought and storms have been rare in recent months.

Moreover, some environmentalists now see the facility as a dangerous boondoggle that is decimating wildlife.  Ivanpah is the first concentrated solar power plant, using thousands of mirrors to reflect a concentrated beam of sunshine at a tower that converts heat to steam, creating electricity that can then be transmitted over power lines to fuel distant cities.

But it turns out that those mirrors look like water to birds flying across the desert, attracting them to the site.  Unfortunately the technology is burning birds alive as they fly overhead, including migratory waterfowl.  Ivanpah has been deemed a “mega trap” for birds by the Center for Biological Diversity, which estimates the poorly performing project could kill up to 28,00 birds each year. Moreover, the U.S. Fish and Wildlife Service reports that light at the power tower is attracting massive quantities of insects—which in turn attract birds to feed on the swarms.

This week, a report by the Department of the Interior’s Inspector General reveals an investigation into allegations that Steve Black, a senior official under then-Secretary of the Interior Ken Salazar, exerted undue influence on federal wildlife officials to attempt to influence decisions on alternative energy projects while he was dating a lobbyist for  the NextEra  Energy company and angling to get a job heading up the American Wind Energy Association.   Two of the projects that he sought to push through without appropriate regard for environmental concerns were a pair of solar projects in the Ivanpah Valley, the report reveals.