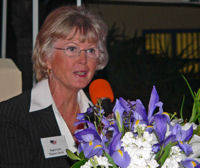 February 6, 2012 (San Diego’s East County) — San Diego County Supervisor Dianne Jacob is asking state regulators to review GPS data from helicopters working on the Sunrise Powerlink transmission line after SDG&E helicopters violated “no fly” zones on three separate occasions last month. The “no fly” zones are designed to protect golden eagles during nesting season.
When East County Magazine  published video showing that SDG&E helicopters violated a “no fly” zone in March 2011 in Lakeside, the utility stated publicly that it would use GPS devices to avoid future violations. Now, Jacob wants the California Public Utilities Commission to explain why the GPS systems failed to prevent the most recent incursions, which occurred at Bell’s Bluff near Alpine and in Thing Valley further east.
“SDG&E helicopter activities have been plagued by dangerous mishaps that have outraged communities along the route and called into question the integrity of the CPUC’s monitoring activities,” Jacob wrote in a letter to CPUC Commissioners. “Were it not for a constituent with the aviation experience to carefully document the violations he observed, project monitors never would have uncovered the January “no fly” zone violations,” she wrote.
Jacob told Commissioners that regulators were not investigating constituent complaints related to helicopter problems unless constituents provide detailed information regarding the date, time and location of an alleged incident, along with a description of the helicopter. She said this did not go far enough in light of SDG&E’s past pronouncements that GPS devices would immediately alert pilots entering into “no fly” zones.
In June of 2011, a Sunrise helicopter dropped a 16,000-pound section of lattice tower some 200 feet from the sky. It landed next to a busy Imperial County highway. That same month, transport hooks from the same helicopter malfunctioned, and a different section of lattice tower dangled precariously in the air as crews lowered it to the ground. In August of 2011, an air compressor fell from a helicopter working on the Sunrise Powerlink spilling some 50 gallons of diesel fuel.