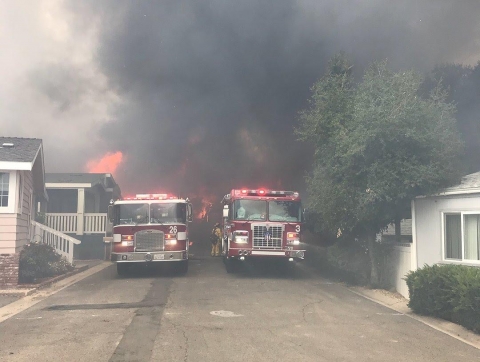 July 1, 2019 (San Diego’s East County) – Across California, some insurance companies have stopped writing policies for homes in areas at high risk for wildfires, even dropping policies for some long-standing customers, Voice of San Diego reported in mid-June.

Now, Supervisor Dianne Jacob has written a letter on June 27 to California Insurance Commissioner Ricardo Lara urging him to take immediate action to “address the heavy-handed, blanket approach that insurance companies are currently utilizing to deny insurance though those who live in areas where wildfires may occur.” She also called on Lara to hold a public hearing in San Diego County on the issue, to allow residents to speak out and share concerns.

Jacob notes that San Diego County has invested over a half billion dollars to bolster fire and emergency response capabilities in the past 10 years. That investment has resulted in a greatly improved ISO rating from the state, she says, adding that areas within the San Diego County Fire Authority’s jurisdiction “received an `ISO split classification’ of 3/3X, which places the Fire Authority in the top 10% of classifications in the nation.”

She adds, “Insurance companies should evaluate individual jurisdictions for fire and emergency response capabilities rather than cancel policies based on fires that occurred elsewhere in the state.”

The insurance companies’ actions have come after devastating wildfires over the past year and forecasts which indicate climate change will fuel increasingly destructive fires in the future.

Jacob notes that if insurance companies continue to refuse coverage for homes in rural areas, fewer homes will be built, exacerbating the housing affordability and availability crisis.

The problem isn’t just occurring in northern California, where the most recent firestorms occurred. Voice of San Diego’s report quotes Alpine Fire Marshal Jason McBroom, who reports that homeowners have been frantically calling him because they can’t find a company to insure their homes despite efforts to improve the community’s fire readiness after the West Fire burned dozens of homes last summer.

Some companies are offering surplus policies by outside insurers, but costs can be prohibitively high. Another option for homeowners denied coverage initially is to get fire insurance through the state’s FAIR Plan Association, which is typically less than supplements on the private market but can still be unaffordable for many residents. There’s also a maximum limit of $1.5 million on FAIR policies.

Jacob’s announcement on Facebook of the letter she sent to Commissioner Lara prompted thanks for some rural homeowners and posts from some local residents who said the problem has happened to them.

“My insurance was not renewed and the agent found an insurance company that’s charging almost double what I as paying and they’re not approved by the state,” Alan Marvin wrote.

Nicole De Witt says she has been cancelled twice in the last four months. “Now I am searching and can’t find anyone to cover me!”

Denise Kelly wrote that many insured for decades are having their insurance cancelled. “Then, there are those of us who sold a home in Ramona, and the new buyers could only get coverage from a very unknown provider. If our ability to buy and sell our real estate goes away, California comes to a halt!”

KGTV 10 News ran a report with tips on what to do if your wildfire insurance gets dropped.

A notice of non-renewal must be sent at least 45 days before your policy expires and must tell you why the policy isn’t being renewed.  The notice must include a contact at the insurance company and information on your right to appeal the decision. Underwriting guidelines must be objective and applied consistently.

If you lost a home in a wildfire, a new state law gives extra protections including requiring the insurer to provide automatic policy renewals for two years.  Property owners living in declared wildfire disaster area, but who did not lose a home, are entitled to one year of protection from being dropped by an insurance company.