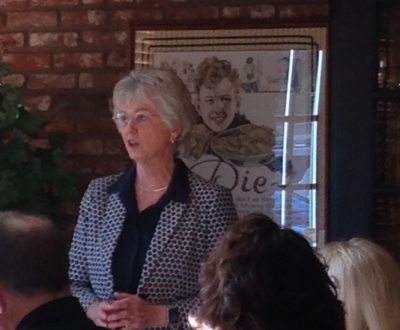 By Liz Alper
February 10, 2016 (San Diego) - As is tradition, the La Mesa Chamber of Commerce hosted Supervisor Dianne Jacob as its first speaker of the year at Marie Callender's at 6950 Alvarado Road in San Diego.  Several La Mesa organizations were also present, such as the Lamplighters Community Theatre.

Supervisor Jacob talked about her Alzheimer's project, one of her passions.  She also praised the La Mesa-Spring Valley School District and her alma mater, Helix Charter High School.
Jacob updated us on the status of the county.  She noted the new projects that have been completed in Alpine, such as a new library.
On the Alzheimer's project, Jacob noted that 60,000 people in San Diego County alone suffer from the disease.  She gave a quick overview of the project for those of us who weren't aware of what it seeks to accomplish.
Jacob has won two national awards for the Alzheimer's project, which aims to help caregivers, primary care physicians and first responders better take care of Alzheimer's patients.  As for a cure, Jacob announced that at a cure round table meeting, researchers said that they may have a cure in the waiting and that convinced her to start the Collaboration for Cure (C For C).

C For C is a five year plan with eight projects for drug discovery for a cure for Alzheimer's.  Jacob is determined that we will find a cure for Alzheimer's right here in San Diego.
She also announced some apps, such as Alert San Diego, that help people that do not have Alzheimer's identify people with Alzheimer's that may be wandering around lost.
Another issue close to Jacob's heart is human trafficking.  She announced that there is a team of 26 federal, state and local laaw enforcement officials trying to rescue young girls from these sexual predators.  She is also concerned that schools are oftentimes not aware of this issue.
Jacob is also striving to help the homeless.  One of her projects, the Psychiatric Emergency Response Team, has been very successful.  She continues to fund Boys and Girls Clubs in East County.
Jacob was thanked for her water conservation efforts at Cuyamaca College and is working on going solar and encourages others to do the same.
Lastly, Jacob announced an event that is important to seniors.  Tomorrow morning at College Avenue Baptist Church, there will be an event called "Don't Get Hooked" targeting phone scammers and what senior citizens need to know.  Breakfast will be held at 8:30 a.m. and the event begins at 9:00 a.m.
The next Chamber event is the Salute to Local Heroes at the Town & Country Resort Hotel's Golden Ballroom located at 500 Hotel Circle North in San Diego at 5:30 p.m. on Wednesday, February 24th.

She announced that there is a team of 26 federal, state and local laaw enforcement officials trying to rescue young girls from these sexual predators. She is also concerned that schools are oftentimes not aware of this issue. How many are local law enforcement and what funding has the county provided for training of teachers and administrators in school? All the money seems to go to victims funds and I heard last week that any funding there was for prevention had been cut. I have contacted your office twice but never received a reply.

We did not receive any email from you.