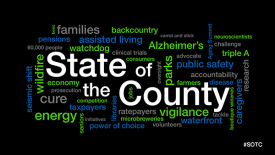 January 30, 2014 (San Diego) – In her state of the county address yesterday, Chairwoman Dianne Jacob  said the County has saved nearly $2 million a year by buying 90 percent of its electricity from sources other than SDG&E.  “The problem is, consumers don’t have the same right. You can’t shop around like the County.  But if it’s good enough for government, it should be good enough for you,” she said, then announced support for a community choice aggregation to give consumers new choices in where to buy electric power.

Under the program, communities such as San Diego band together to buy and sell electricity on behalf of ratepayers through a publicly owned system.  Power would be delivered through the grid, but could come from options outside of SDG&E.  “That would spur competition and, we expect, drive down rates,” Jacob said, adding that she wants the Board to “bring our consumer energy market out of the Dark Ages” with community choice as part of a renewable energy strategy that will be considered about a year from now.

Supervisor Jacob, who represents East County, also vowed to take a “fresh approach” to reviving agricultural entrepreneurs.  “I’ve got three words for you: Bees, beer and burgundy,’ she said.  Just as the County eased rules to encourage wine making and horse stables, now Jacob aims to relax rules on beekeeping in unincorporated areas and make it easier to open a microbrewery.  “The way Julian is known for its apple pie, the backcountry should be known for its brews,” she said.

She added, “Let’s remember what makes San Diego special and build on that, too. Our parks and hiking paths, our backcountry and beaches.” This year the County will acquire 300 acres of open space and is working on a new equestrian center in Lakeside. “As a longtime horse lover, I can’t wait to saddle up for that one,” Jacob added.

Revelations of serious and abusive conditions in local care facilities for the elderly have also drawn county scrutiny, particularly with the number of people 75 years or older due to triple by 2030.  Media has reported that an elderly man at one facility fell on the floor and was injured.  “It was two days before staff discovered him, and when they did, he was dead….This happened in San Diego County, and it shocks the conscience,” said Jacob.

The state has stripped funding from a program that helped the County provide oversight—so Jacob said she’ll ask the Board to full restore local program funding. She noted that she recently stopped in unannounced at local nursing homes to check on conditions. “We need more eyes and ears in the field.”  She applauded legislators in Sacramento for introducing bills to improve state oversight and care. In addition, Jacob said, she is working with assisted living homes to devise a rating standard to guide consumers and has also worked with the District Attorney to form a special prosecution unit to crack down on facilities violating the law.

Alzheimer’s Disease has reached epidemic levels here and is now the third leading cause of death in our County—and it’s forecast to double in the future.  Jacob is co-chairing the San Diego County Aging Summit and revealed that this month, “neuroscientists from across the nation launched what may be the most ambitious attempt yet to find a treatment for Alzheimer’s. Researchers are using volunteers to test a drug that attacks the protein.”  The national clinical trial seeks patients 65 or older; to participate n the study contact brainlink@ucsd.edu.

She voiced concern over state realignment shifting state prisoners to county jails, calling the program “a mess.”  In response the County will add 400 jail beds this year and is also opening new Sheriff’s substations in Rancho San Diego, Lakeside and Pine Valley.  Rehabilitation programs are also being improved.

Jacob cited sex trafficking in our region as a growing concern and said the County will press its case in Sacramento, asking legislators to pass a bill to put “teeth in our efforts to crack down on gang pimping.”

Public safety has grown from a fourth of the County budget ten years ago to a third of the budget today, largely due to the threat of wildfires.  “Next year, we plan to wrap  up the last phase in our efforts to consolidate many rural fire departments,” Jacob stated. “We’ve seen some brutal fire season in our County. We’ll see others. When they strike, we need to make sure we’ve done all we can to protect people and property.”

To reduce worker compensation claims, the  County will be implementing a program similar to Reno’s that offers specialized health services to police officers and other first responders to reduce their risks of heart attacks, a program that could save over $1 billion in medical claims while also saving lives.

The total County budget is $5 billion. Jacob praised the County’s efforts to pay for capital projects in cash wherever possible, a move that has saved taxpayers huge sums in interest and helped the County retain its triple-A credit rating.  She also praised county construction projects for creating jobs and helping dig its way out of recession.

“We have too much to do on so many fronts,” Jacob concluded. “On energy. On public safety. On the economy. And now even more on aging…Now is our moment to act. Now is the time to take on our next great challenge.”