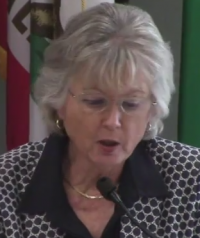 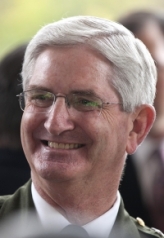 San Diego Supervisors are expected to discuss the matter on April 17th in a closed-door meeting with County Counsel.  But while Supervisor Jacob agues that the Trump administration's push to force local law enforcement officers to stringently enforce federal immigration mandates would increase public safety, Sheriff Bill Gore suggests it would have the opposite effect, making communities less safe by making immigrants afraid to report crimes.

Fox News reports that Supervisor Dianne Jacob is leading the effort for San Diego to follow the lead of Orange County in joining the federal lawsuit against our state’s government.  She says the issue is a matter of  major“public safety” to prevent immigrants from being released from jail to potentially commit more crimes. Jacob predicted the proposal is likely to be approved by Superivsors on a 3-2 vote.

Jacob said of the action, “Let’s be clear — this is about people who are coming into our country illegally and they’re breaking the law — they’re criminals.”

But San Diego County’s Sheriff, Bill Gore, told East County Magazine in an interview last week taped for airing on KNSJ radio that California’s sanctuary state law already allows ample cooperation between his department and federal authorities regarding immigrants who have committed serious crimes, thanks to changes that Sheriff Gore helped to negotiate directly with Governor Jerry Brown.  Those allow his jail staff to turnover immigrants who have been convicted of, or arrested for more than 800 serious crimes.

Sheriff Gore voiced serious concerns about the federal crackdown on immigrants who have not committed serious crimes vs. state law, stating, "This is“a terrible example of politics getting in the way of public safety…I don’t know a chief or a sheriff in the state that wants our deputy sheriffs or our officers out there enforcing federal immigration laws. It makes us all less safe.”

He notes that San Diego County has an estimated 250,000 to 300,000 undocumented people. “If you have that many people that see deputy sheriffs as immigration officers, and they are afraid to report crimes, that makes us all less safe.”

Our interview was conducted before news about the County seeking to join the Trump lawsuit was known, though Orange County had announced its intent to do so.  But Gore suggested that the Trump administration lawsuit seeking to force federal interference with local law enforcement by overturning California's sanctuary state law is unnecessary and counterproductive.

He noted that there is a long history of Immigrations and Customs Enforcement (ICE) screening people in county jails . State law has changed what information can be shared with federal partners. Gore said he met personally with Governor Jerry Brown to make the state's  intiiallly proposed law more acceptable.  In the final bill adopted, Gore says he can notify ICE when prisoners who have been convicted or, or arrested for any one of 800 serious crimes are set for release from jail, so that ICE can take the into custody if the agency wishes to do so.  State law does not require such notification for minor offenses.

If ICE does not take custody of serious offenders in jails, the agency will do sweeps in neighborhoods instead, the Sheriff says. “We’re trying to get a good policy in place that provides public safety and keeps our neighborhoods safe,” he concludes.

Hear Sheriff Gore's comments at the audio link above.

What would the Butcher of Ruby Ridge know about keeping people safe?

While sitting on coffers of $7 Billion Dollars for years they just watched as the Homeless Crisis cloud mushroomed. While County Employees struggled to manage and some even qualified for Government Assistance, they voted themselves a raise. While Hep A spun out of control, they just sat on the sidelines and watched,for too long, as people died. This Republican Cabal needs to be broken up and we have November to make that happen! They’re just using the “Trump Effect” now to be the bad actor’s they’ve been all along!

Aren't they interesting? Blindly following their leader into the dark abyss. Doesn't matter what the real truth is either. Spew the rhetoric, with it's accompanying lies, somehow convincing them that what they say is the truth and everything else is "FAKE NEWS". ROFL!!!
Only a liberal loon would come up with that conclusion

I think your racism is showing. Fox and News are not words most people could use in a sentence.

Someone please advise Jacobs that it has never been part of her function to side with the Feds against her own State,,,moreover, immigration is a federal issue and however imperfect it may be as a system it is for the Feds to straighten out. Jacob's venue is a California County and that job doesn't involve carrying water for the current idiot in the nation's front office. If your current job doesn't provide you with enough of a grand sweep in responsibility, feel free to vacate your office and make room for someone who doesn't see "immigration as a "safety issue". You've been in office way too long in the first place! We aren't suppose to have "career politicians".
Dianne was a favorite in Julian until she began bullying JCFPD to dissolve. Now she supports Trump's inhumane efforts to deport DACA and spend billions to build a wall. She is no longer a favorite of mine. #CaliforniaSanctuary
http://www.foxnews.com/politics/2018/04/06/justice-department-announces-zero-tolerance-policy-on-illegal-border-crossings.html
Refuses to honor the Second Amendment nor to help rid the County of illegals. He needs to change his party affiliation to Democrat.