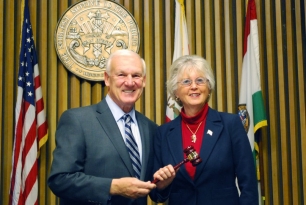 January 11, 2017 (San Diego’s East County) – East County’s Supervisor Dianne Jacob has been named Chair of the San Diego County Board of Supervisors, after being sworn in for her seventh term of office.  Former Chair Ron Roberts passed the gavel to his successor during Supervisors’ meeting at the County Administration Center on Tuesday.

Also sworn in was Supervisor Kristin Gaspar, who defeated Democrat Dave Roberts, so all five members of the board are now Republicans. Gaspar will serve as Vice Chair, giving the County two women leaders at the helm.

Chairwoman Jacob will speak about this year’s goals for the county when she delivers the annual State of the County address on February 1st at the County Operations Center in Kearny Mesa. Her speech will be titled “Seven in ’17: Seven ways to better serve the public and prepare for the future.”

This will be Jacob’s last term of office due to term limits.  After the election in 2020, East County will have a new Supervisor for the first time in more than three decades.