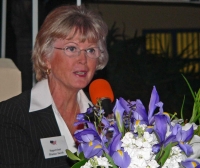 June 13, 2012 (San Diego)-- Long-time County Supervisor Dianne Jacob spent Election Day in her East County District meeting with constituents and hoping for a win at the ballot box for a record sixth time. No other Second District supervisor has served over two terms.

Jacob won re-election outright in the primary with over 50% of the vote, defeating challenger Rudy Reyes, an archaeologist and Cedar Fire victim who championed fire safety issues. Jacob received 78%, while Reyes received 22%.

Reyes has criticized Jacob for  the County’s opposition to medical marijuana, including a lawsuit brought by Supervisors aimed at blocking sale of medical marijuana in San Diego.  The worst burned victim in the Cedar Fire,  named a hero by the Smithsonian Institute for his efforts to save his parents during the blaze, Reyes has also argued that the County needs stronger wildfire protection measures.

Jacob, who was first elected in 1992, is known for spearheading the creation of the County Fire Authority after the 2003 wildfires. Over the last decade, the County has invested more than $230 million in better fire protection and now partners with CAL FIRE to keep 50 rural stations open 24/7, according to Jacob’s office.

During Jacob’s tenure, the once cash-strapped County overhauled its budget and invited the private sector to compete with public employees to provide County services.   While some have criticized the outsourcing of  jobs, the County subsequently received a AAA credit rating and was named among the three top-managed counties in the nation by Governing magazine.

Jacob has been a vocal critic of San Diego Gas and Electric and is fighting the utility’s proposal to charge ratepayers for the costs of the 2007 wildfires, which were caused by SDG&E infrastructure.

For her efforts to expose corruption at the San Diego/Imperial Counties chapter of the American Red Cross, she was interview by the late CBS News correspondent Mike Wallace and appeared on television’s “60 Minutes” in 2002.

In 2008, Jacob was sued by a company owned by billionaire real estate investor Sam Zell, the largest mobile home landlord in the United States, for statements she made that were critical of Zell’s business practices.  Courts have repeatedly dismissed the suit.

Jacob is a former elementary school teacher. She spent 17 years as a board member of the Jamul-Dulzura Union School District, ten years on the board of the California School Boards Association and four years as a member of the San Diego County Planning Commission.