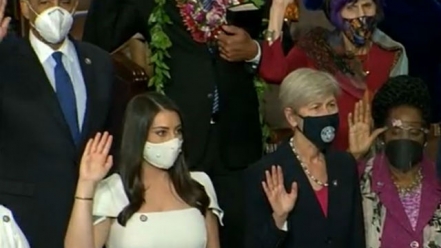 Photo:  Sara Jacobs (lower left) is sworn in as a House member. Image from C-SPAN video

January 4, 2021 (Washington, D.C.) - San Diego-native Sara Jacobs was sworn in as a member of the House of Representatives on Sunday, becoming at 31 one of the youngest members in Congress.

Jacobs, a Democrat who beat former San Diego Council President Georgette Gómez in November to succeed retiring Rep. Susan Davis in the 53rd District in central San Diego County, is the youngest member from California and the third youngest in the House.

Also sworn in was veteran Congressman Darrell Issa, 67, who returned to Congress in the 50th District in East County after retiring in 2018 from the 49th District in coastal San Diego and Orange Counties. Issa beat former San Diego City Councilman Carl DeMaio in the March primary and Democrat Ammar Campa-Najjar in a close race in November.

The swearing in of new members of Congress was temporarily delayed when Texas Rep. Chip Roy objected to seating new members from Arizona, Georgia, Michigan, Nevada, Pennsylvania and Wisconsin and then demanded a time-consuming roll-call vote to proceed.

Roy is a former chief of staff to Republican Sen. Ted Cruz, who is leading right-wing Senators in an effort to overturn the vote in those six states to give President Trump a second term.

After the ceremony, Jacobs said she is “ready to do the hard work of getting us out of this pandemic, rebuilding the American people’s trust in our government and institutions, and bringing a new approach to governing.”

“Today, I became the youngest member from California and the third youngest member in all of Congress,” she said. “And I take that responsibility seriously — to ensure my and future generations have a world that is livable, an economy that is equitable, and that the United States rebuilds our institutions and our standing around the world.”

Jacobs is a third-generation San Diegan who attended local public schools before graduating from Columbia University with a bachelor’s degree in political science and a master’s degree in international security policy and conflict resolution. She served in the Bureau of Conflict and Stabilization Operations at the State Department during the Obama administration.

Issa, a successful businessman who served nine terms in Congress before his first retirement, said he is “honored to again take the oath of office to serve as a representative in Congress and eager to confront the challenges we face as a nation and advance solutions that will benefit our people for many years to come.”

“As I have throughout my career, I will work to build broad coalitions in crafting legislation and I will work tirelessly to hold wrongdoers accountable and ensure the people’s right to a transparent government,” he said.