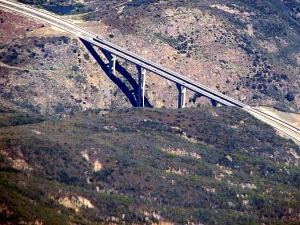 February 7, 2019 (Pine Valley) – Robert Verlin Bruno Jr., 48, of Jacumba Hot Springs ,stopped to help when he saw a Ford F-150 pickup truck with a baby as a passenger. The truck had struck a guardrail on Pine Valley Bridge on Interstate 8 before dawn yesterday around 5 a.m.

But then a truck swerved to avoid the crash and collided with a Kia. The two vehicles came careening toward him on the icy freeway. Bruno jumped over a guardrail to avoid being struck, not realizing in the darkness that the spot dropped off into a 300 to 400 foot deep ravine.

His body was recovered two hours later by authorities, according to the CHP incident page with crash details.

Bruno was on his way to work as an installation manager at Life Deck in San Diego when he spotted the disabled truck,  in which the driver and baby were trapped.

The baby was uninjured and the driver of the pickup sustained only minor injuries. No other motorists were hurt, according to the California Highway Patrol.

The Pine Valley Creek bridge, also known as the Nello Irwin Greer Memorial Bridge, is 440 feet high with a 450-foot span, one of the highest bridges in the U.S. It has been the scene of many deaths through the years, most of them suicides.

Speed and fog are believed to have contributed to this tragic multi-vehicle collision that ended in the death of a good Samaritan.

Bruno's fiancée, Gwendolyn Sneed, with whom he raised a son in Ocean Beach, says Bruno was a man known for helping out friends and even strangers.

She told NBC-7 news, “He did what he thought was right at the time.”