“Nothing in this project does a hoot for anyone who lives out here.” – Cheryl Diefenbach
By Miriam Raftery
May 11, 2021 (Jacumba Hot Springs) – Residents in Jacumba Hot Springs are shining a light on their concerns about the proposed Jacumba Valley Ranch Solar Project, which includes a 643 acre solar energy facility on 1200 acres of land. That’s six times the size of Jacumba Hot Springs’ downtown district.Residents of this high desert town along the U.S.-Mexico border in San Diego’s East County held a community meeting Friday night.  The meeting was held in person, since many in this remote enclave lack access to high speed internet and the County is only allowing the town’s planning group to hold virtual meetings. More than 50 people showed up—around a tenth of the town’s population, based on the last Census. 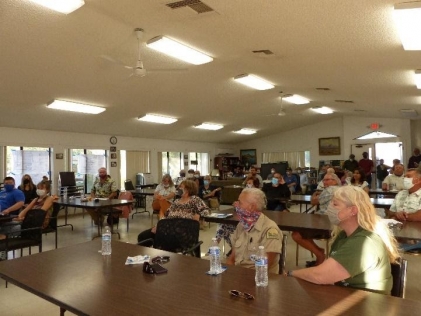 Diefenbach spoke first, noting that Jacumba is located within the Mountain Empire subregional plan.  “Under our plan, this community wants respect for the environment. This community does not want large industrial projects, green energy or otherwise, in our town,” she said.
Concerns include glare, noise made by trackers, loss of the natural terrain and community character, as well as loss of tourism – all for power to be sold to SG&E and transmitted to San Diego. 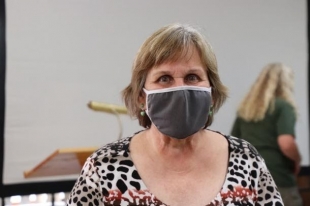 “Nothing in this project does a hoot for anyone who lives here,” Diefenbach observed, adding that developers elsewhere have given back to communities impacted by energy projects, such as donating a generator for the town, or undergrounding power lines. One resident in the audience asked if the developer might put in a sewer system for the town.
The Jacumba Sponsor group voted to support a 200-acre project north of homes and well away from scenic highways.But the proposed project is much larger. So the group will meet again on May 18th via Zoom to hold a vote on the actual project proposal. 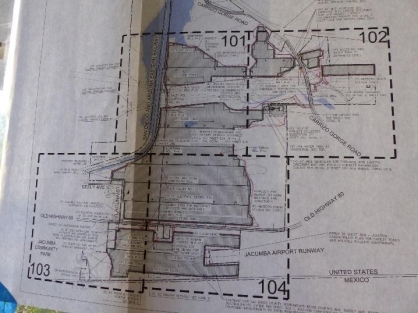 Their vote is merely advisory; if approved by the County Planning Commission and Supervisors, the full project would include 300,000 solar trackers that would generate an estimated 90 megawatts of green energy for the next 35 to 38 years. Though considered an interim project, Diefenbach observed, “Some in this room won’t make it that long.”
Each array of panels would stand 12 feet above ground (higher than a six foot fence that would surround the panels as an ostensible shield) and measure up to 300 feet long.
In some areas, the panels would be just 65 feet from homes. Solar panels would be within 300 feet of the community center and park, originally just 45 feet, though the developer agreed to increase these setbacks.
Panels would also surround Jacumba’s glider port on three sides, raising concerns over student safety and visual blight. “It would no longer be scenic. People come here because it’s scenic,” Diefenbach said.  “We don’t want top discourage anyone from coming to Jacumba. We want to encourage revitalization of our town and our businesses.”
The site would also include 75 lithium ions, nano-phosphate batteries, two inverters, and a transformer on skids at 25 locations. Fencing would be topped by barbed wire, with landscaping to try and lessen visual impacts.
Of the total 1200 acres, the solar panels would cover 643 acres; another 435 acres would be dedicated as open space as mitigation to protect sensitive species. Another 280 acres has not yet had a usage designated.
Around 140 acre feet of water from wells on site would be used for grading and another 11 acre feet to wash panels four times a year.
The project would require 13 months to complete, with 30 truck trips daily on Carrizo Gorge and Old Highway 80.  The workers would not live on site and no permanent jobs would be created.
The project site includes a former organic farm that went fallow after a well ran dry – and after residents complained of an eye gnat infestation tied to the farm. Still, Diefenbach notes that loss of prime farmland is a concern, as it is the lost opportunity for other land uses.
“Some might like to see homes, or a border crossing. But once solar panels go in, that probably won’t happen,” she said.
Another issue is the increased risk of wildfires that construction crews and electrical lines bring to this isolated part of San Diego County.”We only have two firefighters on site in Jacumba,” Diefenbach said.  “There are no plans to increase that, even with 500 people building the solar project. The population would double, with no extra firefighting.” 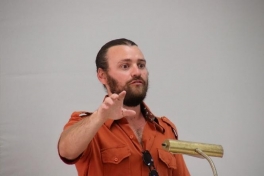 Osborne, the new owner of the Jacumba Hot Springs Resort and Spa, spoke next.
“I moved here with two partners to bring back the glory like it was in the ‘20s and ‘30s,” he said.  He announced the spa is undergoing extensive remodeling and will soon reopen with a new restaurant featuring healthier options. The old bath house is being fixed up to convert to a town square, keeping the “soul and character” of the original.  Progress is also being made on rehabbing Lake Jacumba, he said. 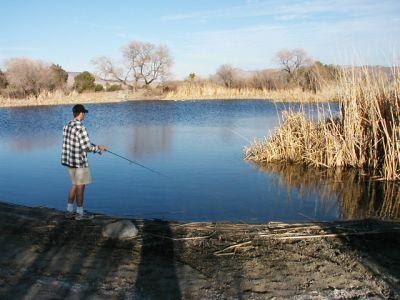 Yet revitalization efforts may founder if the tourists whom these businesses rely on stop coming to Jacumba due to power lines, massive batteries and solar arrays marring the desert scenery that draws visitors here.
“This solar project is something I think we need to fight,” Osborne declared.  “We need a vibrant economy again, just like in the ‘20s, ‘30s, ‘40s and ‘50s.”
Fighting back will be difficult, he acknowledges, since California’s aiming to convert to all green energy by 2025.  He believes opposing any green energy isn’t a viable strategy. “We can’t just say no,” he acknowledges, but suggests that instead, supervisors need to be persuaded to adopt a scaled back project that protects the community character and keeps the solar footprint out of downtown Jacumba, while also having Jacumba provide its fair share of green power – a goal other communities should share in, rather than dumping all industrial energy projects in East County’s small towns and open spaces.
He and his partners hope to forge alliances with like-minded people across San Diego County. “We’ve been stepped on for a long time,” he says of the county’s treatment of Jacumba in the past. “We’ve hired a land use lawyer and a PR/marketing professional.” 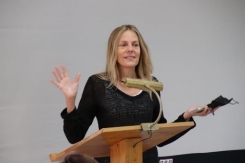 Stephanie Saathoff, the PR professional with the Clay Company who previously coordinated groups to successfully block the Newland Sierra housing development in North County, is part of that team. She says the goal is “balancing the importance of solar with this community's
quality of life and cultural concerns.”
Next steps
The Jacumba Sponsor Group will meet via Zoom on Tuesday, May 18. Diefenbach acknowledges that this is “difficult” for many but urged those present to “try to join. It’s real important. We will be voting to approve, or to conditionally approve, or we will vote to recommend denying the project.”  Those present were asked to fill out a survey to help guide planners to honor the community’s wishes.
A representative of the County will be present, said Diefenbach, who also invited a representative from the developer, JVR LLC, to show up after he told her he’d never been to Jacumba before.
The final Environmental Impact Report on the project is due out in late June. The County Planning Commission could meet as early as July 9, which will provide another opportunity for community members to speak out for or against the project.  Supervisors could vote as soon as August 18.
Residents and others who care about Jacumba were urged to contact Supervisor Joel Anderson, whose district includes Jacumba, as well as the other four Supervisors to share their views.
Will the project ultimately be built, or will it be modified or perhaps rejected?
“It probably depends on how much pushback there is,” Diefenbach concluded, “and whether we roll over or not.”