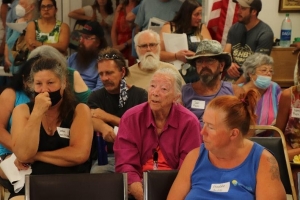 Story and photos by Henri Migala

June 30, 2021 (Jacumba Hot Springs) -- Imagine moving to a small, quiet, rural community over an hour away from a major metropolitan area to enjoy the quiet solitude of the open backcountry--only to learn that an international investment group is planning on building a massive solar project, six times larger than your entire community, within feet from you house.

A crowd of 100 to 150 concerned residents attended the latest community meeting in Jacumba on June 17 to express their opposition to County Supervisor Joel Anderson regarding a proposed solar power project, JVR Energy Park, to be built in their community by a foreign investor. Although the Supervisor’s staff was there, Anderson did not attend the event.

Greg Curran, a member of the Jacumba Sponsor Group (planning group) told ECM, “This was not what the community was expecting.”  He, and others, had expected Supervisor Anderson to show up and for there to be a formal presentation.

She asked people to leave their contact information so they can be notified of future meetings of the County Planning Commission and Supervisors.

She said for the state to meet its ambitious green energy goals, it will need eight times the battery storage and three times the number of solar and wind projects that it currently has.

Philip Valenzuela, who used to work for Dow Chemical, asked, ”Why are they putting this in? I don’t want this to turn into another Owens Valley! They’ve got all this desert out here they could want. I don’t want to live next to an industrial plant and that’s what we’re going to get,” citing Imperial Valley as another example.

Another resident shouted out, “They want our water!”

Carmen Gomez Villeda said angrily of developers, “They’ve been taking our water for years and when we stand up against it, they do this!”  She recalled living near contaminated uranium landfill in a Navajo area and asked, “What will happen to the animals?” if the solar project is built.

Valenzuela again stated, “Look what Mulholland did to Owens Valley. They took the water.”

Diefenbach then said developers are wooing County planning commissioners and have paid millions for various reports to move project forward. “I would call it hush money,” she asserted.

Someone asked about solar panels creating a heat island effect, where solar panels warm the surrounding area in this high desert town  Diefenbach acknowledged that this is also a concern.

A woman suggesting pooling money so residents could buy up Kitchen Creek Dairy land from the developers.

Diefenbach said that the developer spent millions of dollars trying to get biological and cultural studies done; they have already obtained a power purchase agreement with SDG&E even though project hasn’t been approved yet, she said, adding, “He [the developer] seems to think it’s a done deal.” 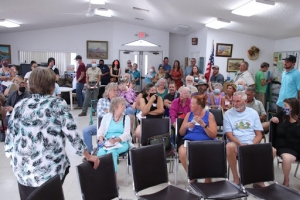 Diefenbach warned that calling the project “short-term” is deceptive because “with the electrical switchyard here, there will be another project in the future, after this one ends.”  She added, “The green energy push is “moving faster than a speeding freight train.”

An older woman said in a soft yet anguished voice, “I came to the beautiful town of Jacumba back in 1942 when I was 10 years old.  Now I’m 89.” She called Jacumba “the most beautiful place in the county” adding “I love it and I don’t want to see anything happen to it.”

A labor representative from the International Brotherhood of Electrical Workers (IBEW) spoke up to say that their union supports the project because it will create jobs for their members. The collective response from the audience was unambiguous in its opposition to her comments, partly because the jobs will be only temporary.

Curran noted, “I live off the grid and have wind and solar. But this project is not green energy. This is industrial, and it’s destructive.”

Diefenbach noted, “I wrote the history book” for this region. “I’d like to keep the history as well.”

She said the County Planning Commission is expected to meet July 9.  After that it will go to the Supervisors.  She noted that three of the Supervisors don’t have land in East County, where these projects can be sited. She encouraged everyone to voice their opinions in writing and at the hearings, and urge decision makers “not to screw Jacumba.”

Jeffrey Osborne, who is the new owner of the Jacumba hotel/spa, spoke to the group and said, “We can’t fight to stop it but we can vote for distance – to push it back away from homes and the town.” Osborne brought a map of an alternative plan that allows for more community space, calling it “Equity for Jacumba Alternative.”

He, along with the new owner of De Anza Resort, “want to bring this valley back and we’re putting millions of dollars into it,” he said.

Osborne encouraged everyone to talk with the land use staff who were present at the meeting behind tables they had set up to meet the residents.  “They’re here to represent us – we’ve got to give them something to work with, a compromise.”

Some voiced concerns about the project’s potential negative impacts on the economy and events that draw visitors to this tiny high desert town, such as a street fair held earlier in the month.  A man in the back mentioned, “I made $400 at the street fair last week selling kazoos.”

The community meeting disbanded, and was followed by a meeting of the Jacumba Sponsor Group, the community’s advisory planning board. The board had voted unanimously at its May 18th meeting to deny the project as the developer presented.

“The feelings of those on the Board is that the developer's proposal is outrageous in size and scope; 623 acres is six time the size of the village of Jacumba,” said Curran.

An alternate plan, proposed by Jeff Osborne, is called "Equity for Jacumba Alternative," and “reduces the footprint of the project to 300 acres with dedicated open space, space for future development, Airport Safety & Expansion and a Wild Life Corridor,” continued Curran.

Two very important dates for community input are July 9th, at 9 a.m. when there will be a hearing on the Jacumba Valley Ranch Solar Project at the County Operations Center, at 5520 Overland Ave., San Diego (public comments will be limited to 3 minutes).

The last opportunity for public input is August 18, at the 9 a.m. hearing at the County Administration Building, at 1600 Pacific Highway in San Diego.

Concerned citizens, and people supporting the community of Jacumba, should are urged to attend these meetings and express their concerns.

View a short video excerpt of the public comments made at the community meeting in Jacumba: https://youtu.be/nHJWbO8N3DI