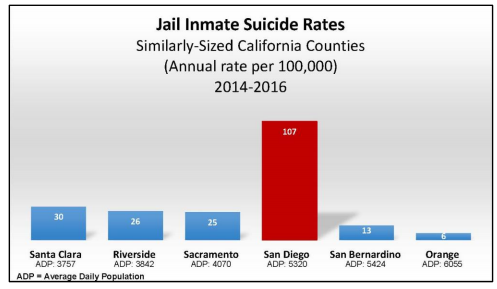 August 15, 2019 (San Diego) - Prison and jail suicides are not just about inmates hanging themselves with bedsheets.

#Warning: graphic descriptions, but no graphic images in link and/or story.

“They jump off of their bunkbeds, they hit their heads on the ground, you can see all the blood,” said a health care professional who asked that their name be withheld.

The health care professional (“HCP”) is an East County resident with decades of experience in the field, including previously working at the George Bailey Detention Center in Otay Mesa.

The inmates were transported to Scripps Chula Vista or UCSD Medical Center–Hillcrest for emergency care if a suicide was not successful and the prisoner deemed in need of emergency services according to HCP.

San Diego County Jail has had one of the highest incidences of suicides in a California county jail system over several years—more than 135 suicide deaths in the past decade, according to public records reviewed by the Guardian.

An excerpt from the study concerning a suicide attempt stated, “The video shows the inmate standing naked on the cell’s desk, praying and preparing to jump, for over 14 minutes. He then dove head-first on the floor.”

But in 2019, the spate of suicides in the San Diego County Jail continues, with four prisoner suicides in six weeks earlier this year, the Guardian reported in April.

The alleged suicide of Jeffrey Epstein, a high-profile alleged pedophile, in New York city’s Metropolitan Correctional Center has raised questions of how it happened in that setting and the alleged mechanics of how Epstein did it---reportedly kneeling with a bedsheet used as a hanging noose, according to the New York Post. The Washington Post reports that the autopsy revealed broken neck bones which could be caused by either suicide or homicide.

“There are nooks and crannies everywhere-they can do it in their own cell or in a cafeteria,” HCP told ECM. “I witnessed head injury suicides but hanging by bedsheets is common.”

How can an inmate get off suicide watch?

“They do a verbal contract with the psychiatrist/health care worker that they will not do it (attempt suicide) again. That is routine,” said HCP. “They can contract out right away; 48-72 hours was normal, but it really depends.”

In its report, DRC noted that during the writing of the report, San Diego County reported one jail inmate suicide during 2017.  Another inmate suicide was reported occurring in March 2018, less than in previous years.

DRC investigated inmate suicides from 2014-16. Of note in the report: "Fifteen people (88.2%) were in jail awaiting trial. (One other was in jail for a brief `flash incarceration’ related to a probation violation). These individuals were not in jail because of a criminal conviction at the time of their death.”

HCP observed “Once they get there they have to be evaluated by a psychiatrist. But they can lie to you. People that do that (commit suicide while incarcerated) are very manipulative, usually if they go through with it, they have a thought-out plan in place.”

The DRC report noted that in one case, a man died by suicide the day before his transfer to another state to face criminal charges. The DRC experts found that custody staff knew he had made a credible suicide attempt a few weeks earlier, and that he was experiencing considerable stress about being extradited. Yet the inmate’s treatment record did not reflect any sense of heightened risk requiring closer observation, monitoring, and clinical follow-up. The DRC experts determined that this suicide death may have been preventable had there been better communication among custody and mental health staff about the inmate’s situation.

“The realization and admittance of their guilt is the hardest. You’re not born with a crime. It’s your upbringing, your environment, circumstances you grow up in, the situations that shape you as a person,” said HCP, adding that alcoholism, drug addiction, and mental health issues as added stressors and conditions affecting inmates and the decisions they make.

Epstein’s situation, in a story in the Washington Examiner by Jerry Dunleavy, states Epstein was reportedly found nearly unconscious on his cell floor with marks on the back of his neck back on July 23 in what was reportedly an earlier suicide attempt, after which he was placed on suicide watch temporarily.

What has not been typically addressed in articles is Epstein’s mental illness before being jailed and what his mental mindset before his death.

According to the Washington Examiner’s story a spokesperson for NYC Office of Chief Medical Examiner “there is no official cause of death yet,” and “We are investigating the cause of death and we have an open case.”

HCP notes, “You can’t really blame the health care professional because some can manipulate………….everyone.”

Speculation in media has suggested that powerful people had motive to want Epstein dead, since his testimony could have potentially implicated two U.S. presidents known to socialized with him as well as foreign heads of state, among other famous people.

Epstein had previously been convicted as a sex offender in Florida, which raises yet another possibility: could he have been targeted by inmates or guards?

While it’s not yet known just what caused Epstein’s death, HCP stated, “The rumor is true. Pedophiles get targeted. They (inmates) watch the news.”