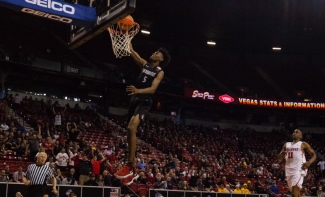 “I think this is a great idea,” Dutcher said. “This allows him to see what the NBA thinks of him and what improvements he can make in his game.”

“After thoughtful consideration with my family, I have decided to enter my name into the 2018 NBA Draft,” McDaniels said. “I will not hire an agent in order to maintain by college eligibility. Testing the waters allows me to get feedback directly from NBA teams.”

McDaniels has until April 22 to enter his name into the NBA Draft and until June 11 to withdraw his name from draft consideration. Players are allowed to enter or remove their names from the NBA Draft multiple times without jeopardizing their eligibility and allowed to participate in the NBA Draft Combine and one NBA team tryout per year.

The 6-10, 195-pound all-conference selection out of Federal Way, Washington played in all 33 games with 21 starts and averaged 10.5 points and a team-best 7.5 rebounds, while shooting a team-high 58.6 percent from the floor (minimum 100 field-goal attempts).

McDaniels showed glimpses of what was to come over the first 10 games of the season. He grabbed a career-high 13 rebounds vs. Sacramento State and then went for 11 points and eight boards in the win over Georgia. Against Bradley, he posted 14 points and 12 rebounds to record his first double-double of his career.

His breakout game came in the victory over No. 12/15 Gonzaga, when he registered 15 points and 10 rebounds. That performance spring-boarded him into the starting lineup for the first Mountain West game and the rest of the conference schedule save for the Senior Night win over nationally ranked Nevada. In 18 MW contests, McDaniels led the team in points (226), but was second in scoring average (12.6), and pulled down an SDSU-high 8.5 rebounds. He shot an incredible 62.8 percent from the hardwood and made 81.3 percent of his free throws, both of which led the Aztecs. McDaniels also ranked second in blocked shots (12) and steals (21), while adding 16 assists.

At the end of the conference campaign, McDaniels was named to the all-Mountain West third team by the league media and to the honorable mention squad by the MW head coaches.

Following both announcements, McDaniels helped the Aztecs win the Mountain West tournament title after they won three games in three days in Las Vegas. Over the course of those three outings, McDaniels averaged 10.7 points and a team-high 8.0 rebounds, while shooting 60.0 percent from the field and 80.0 percent from the charity stripe. In the semifinal round against top-seeded Nevada, the forward put up 17 points and 12 rebounds, including five on the offensive glass.

More recently in the NCAA tournament vs. Houston, McDaniels led SDSU with 18 points and pulled down nine rebounds.