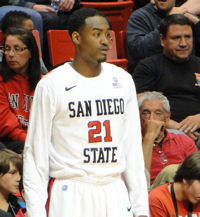 February 28, 2012 (San Diego)--Apparently, San Diego State sophomore guard Jamaal Franklin forgot that Senior Night is supposed to be a celebration for the seniors in their last home game ever.
Franklin matched his career-high in points with 31 and set a new career-high with 16 rebounds as the No. 24 Aztecs defeated the Colorado State Rams February 22 to pull into a three-way tie for first place in the Mountain West Conference standings with No. 18 New Mexico and No. 21 UNLV.

“Actually, in the huddle (before the game), I said this game does represent some seniors leaving, but it also represents a showcase of what we still 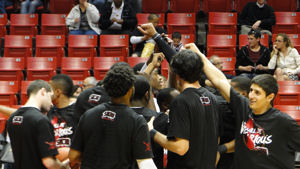 have coming back next year to the home fans,” SDSU senior forward Tim Shelton said. “I expected nothing less than for Jamaal to show up tonight. He definitely did. He got us going. Nobody plays harder than Jamaal. He just really cares. It was awesome.”

Sophomore guard Xavier Thames scored all 15 of his points in the second half and junior guard James Rahon found his shooting stroke again after struggling the past few weeks, scoring 14 points.
SDSU had 24 free throw attempts on Saturday night. The Aztecs would make 20 of those 24 attempts, with Franklin connecting on 14 of his 15 attempts. 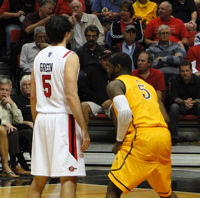 Seniors Garrett Green and Tim Shelton were honored in a pregame ceremony, in which they were given framed jerseys and received standing ovations from the Viejas Arena crowd.
Redshirt junior guard Wes Eikmeier and junior guard Dorian Green each scored 14 points for the Rams, who fell to 17-10 overall and 6-6 in Mountain West Conference play. The Aztecs now sit at 22-6 overall and are 8-4 in the Mountain West Conference standings.
“I felt we had a few empty possessions, where we had good shots and good looks,” Colorado State head coach Tim Miles said. “I wasn’t upset about our offensive execution. We had five turnovers the whole night. We were in a position and they made plays.”
SDSU has two remaining games in their regular season, beginning at Boise State on Wednesday night, followed by another road game at TCU on Saturday.