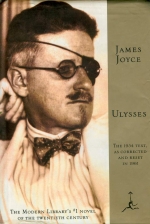 A St. Patrick’s Day reflection on a writer's own odyssey

"We may now imbibe freely of the contents of bottles and forthright books"
Morris L. Ernst, Co-Founder of the American Civil Liberties Union. December 11, 1933.

March 13, 2010 (San Diego) -- The same week this country ended Prohibition, America opened the doors to let people legally read James Joyce's Ulysses. With St. Patrick's Day once more at hand, the greatest of 20th Century novels and the author whose genius gave us at look into our own daily souls deserve a brief remembrance.

Ulysses is the story of a working man named Leopold Bloom during a single day of his life. Making his way through the streets of Dublin on June 16, 1904, it is an adaptation of the story of Odysseus trying to get home, from Homer's epic poem The Odyssey. 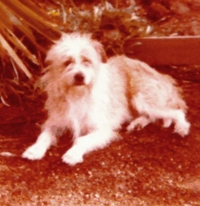 I write this reflection on what would have been the 36th birthday of my dog Squirt. Mr. Squirt, as he was known about town, lived a long and mostly healthy life to the ripe old age of 18 before departing for better pubs. He was a canine of discerning tastes, preferring Guinness to any domestic brands of beer and never taking a drink until I'd thoroughly cleaned out his bowl.

I first read Ulysses in college and of course had an awful time of it. The so-called stream of consciousness prose that I was being told by my Modern European Literature professor represented a new English language, only drove me to wish Joyce had written his novel in the regular English.

I did not understand Ulysses the first few times I tried to read it, though I would often pretend to be reading it with a Guinness next to me and Mr. Squirt's bowl full ... as a way of impressing my roommates and any girls we knew that I was in fact the bohemian intellectual in the making I wished to see in myself.

I would make attempt after attempt - often times reading words while lost in thought to the point that I could go through several pages and not have a clue as to what I'd just read. While I did eventually finish the novel for that class, I knew I'd not really read it. And this fact haunted me for years to follow. A well-read person should know Ulysses, I would say to myself .

Finally, on a St. Patrick's Day of long ago, with three months left till my 30th birthday and Mr. Squirt now two years into the next life, I decided to tackle my character anew. I decided to try once more to be the man who could sit at a pub, knock back a pint or ten, and discuss Ulysses with flare and reason and eloquent purpose.

I vowed to begin on that particular St. Paddy's Day and finish before my birthday. And it was on this attempt that I finally saw what I'd been missing. I saw what had eluded me. I saw the basic issue of Ulysses. I saw me.

It is the simplest of novels to read once a person accepts that my old professor was wrong. It was not a new language at all, but the oldest of all human experiences possible - the things we all think and do daily and by the minute while we go about our lives. 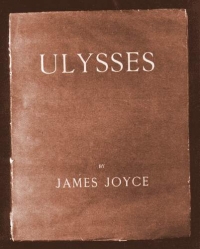 Joyce being a master of human minutiae recreated the inner workings of a normal man ... what a man sees, thinks, feels, tastes ... what goes through his head as he focuses on another objective. Joyce wrote about the process we are all experiencing at this very second we breathe.

I type words on a page trying to compose on essay on Ulysses, but in reality I am also noticing the color of the computer I write on and the yellow legal pad to my left and the picture of Joyce on the cover of my copy of his book.

My mind is filled with memories of Mr. Squirt and his bowl of Guinness and my sacred friends from that time, talking baseball and Iran-Contra and Gary Hart blowing the chance to be president for a fling on The Monkey Business. The posters on our wall and the Replacements singing about last call, while the smell of closet-grown “sage“ fills the room.

All this while I see my girlfriend working from the desk in our home while the rain pelts the ground outside our window. I hear her talking to a colleague while I insist to myself I am drowning-out her conversation as I am focused on my writing. I think about the floral print robe she’s wearing and what she looks like naked and remember her making me dinner last night and the taste of the soup she made and the story we watched on "60 Minutes" about Chinese spies, while I taste the coffee I sip now. 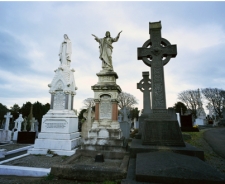 "... the photograph reminds you of the face. Otherwise you couldn't remember the face after fifteen years," thinks Bloom as he walks into the cemetery during his sojourn through Dublin. "... Rtststr! A rattle of pebbles. Wait. Stop. An obese gray rat toddled along side of the crypt, moving the pebbles. "One of those chaps would make short work of a fellow ... Ordinary meat for them. A corpse is meat gone bad. Well and what's cheese? Corpse of milk? I read in that Voyages in China that the Chinese say a white man smells like a corpse. Cremation better. Priests dead against it..."

He described the thoughts we all have and used the language of everyman to get his details across. Sex, love, loss, bodily functions, fantasies and realities of a man making his way through the day. In Leopold Bloom we were looking at the stream of consciousness everyone engages in, yet within a beautifully crafted context of one man's thoughts and the layers each person's life entails.

It took Joyce seven years to finish Ulysses. His eye-sight deteriorated to such an extent due to glaucoma, that during his time creating Ulysses, he nearly went blind and was forced to have several eye operations. The novel was not published until his 40th birthday in 1922. And for his efforts he was hounded by morality critics who decided that the inner workings of a man's mind were too indecent for public consumption. The novel was banned in the United States until 1933.

"The words which are criticized as dirty are old Saxon words known to almost all men and, I venture, to many women," wrote Judge John Woolsey of the US Southern District Court of New York on December 6, 1933. "I have not found anything I consider to be dirt for dirt's sake."

Woolsey went on to say that the novel did not meet the legal definition of "obscene" defined at the time as "tending to stir the sex impulses or to lead to sexually impure and lustful thoughts" and concluded that "nowhere does it tend to be an aphrodisiac."

"Ulysses may therefore be admitted into the United States," concluded Woolsey.

And from that moment when the United States practiced what it preached about the rights to freedom of expression and speech, Joyce's Ulysses has influenced American creativity ... from the literature of William Faulkner and Henry Miller; to the art of Jackson Pollack; the music of Miles Davis and Kirk Cobain; and the films of Orson Welles and Quentin Tarantino.

But the one unfortunate lasting legacy of Joyce’s Ulysses has been the undeserved reputation of a novel so difficult to read that only Literature professors should make the attempt. Unfortunate because Joyce wanted it read in pubs. Wanted the normal working person to see himself in the art, and embrace the celebration of an average day.

“In recording the dailiest day possible, Joyce teaches us much about the world: how to cope with grief and loss; how to tell a joke and how not to tell a joke; how to be frank about death in the age of its denial; how to walk and think at the same time; how to purge sex of possessiveness; how the way people eat food can tell us who they really are,” notes University of Dublin professor Declan Kiberd.

Kiberd, who wrote the book Ulysses and Us: The Art of Everyday Living expanded on the view that Joyce wanted the average person to see themselves in Ulysses and not leave it as a book for the ivory towers of academia.

“Joyce offers the stream-of-consciousness of an ordinary citizen as prelude to nothing more portentous than the drinking of a cup of tea,” wrote Kiberd.

Joyce once said of Ulysses that he’d "put in so many enigmas and puzzles that it will keep the professors busy for centuries arguing over what I meant, and that's the only way of insuring one's immortality."

And Kiberd wrote that Joyce never took his “extraordinary celebration of the ordinary over-seriously.”

“When a fan asked to kiss the hand that wrote Ulysses, Joyce laughed and said ‘no – that hand has done a lot of other things as well,’" wrote Kiberd.

So another St. Patrick’s Day approaches. The Guinness will no-doubt flow and the parades and leprechauns and people wearing green will be out in the streets and pubs having a grand time. I intend to think about Mr. Squirt and Leopold Bloom and my girlfriend in her robe and the way the pub I’m sitting in smells and the feel of Irish whiskey down my throat and the approaching Spring.

All the things of my daily life that James Joyce wanted us to all be more aware of while reading his magnificent novel about the daily life of a man on June 16, 1904. He wrote it for all of us to understand that in fact there is no such thing as an “average day” or an “average life.”

This is what Ulysses is about ... and why everyone should read it ... more than once.