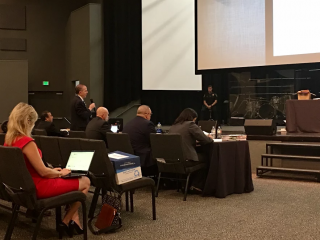 September 6, 2017 (La Mesa) — After months of delays, a judgement is finally expected for the permanent liquor license of Hollywood Casino in Jamul. Closing arguments were presented by multiple attorneys before an administrative law judge for the state Alcoholic Beverage Control Board on Sept. 6 at Skyline Church in La Mesa in front of a crowd of Jamul residents and tribal members. 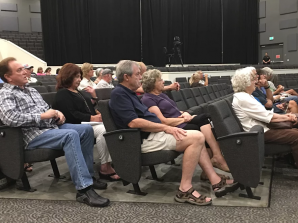 Photo, right: Members of the Jamul Planning Group and residents of Jamul look on during the proceedings.

A new judge presided, after Administrative Law Judge John W. Lewis recused himself in November, saying an email he received could affect his judgment. The closing arguments and judgment are based on the evidence and testimony of the previous hearing.

The new judge interrupted people who brought up the email, so that he would not be forced to recuse himself as well.

The email from Peter Williams sent to various state officials described attorney Patrick Webb, who represents residents in Jamul, as a “semi-vexatious litigant,” a term Webb protests. The communication questioned why Lewis allowed evidence from Webb that Williams contended was outside the judge’s jurisdiction in the alcohol license hearing. That evidence, which Williams disagrees with, alleged that the casino is an illegal gambling institution because of the way the reservation is recognized. According to Webb, this means the casino constitutes a public nuisance and cannot serve alcohol. The current judge ruled that evidence was not relevant, but Webb still focused his closing arguments on it.

The five attorneys presenting closing arguments at the Sept. 6 hearing focused on issues of what jurisdiction the judge could focus on. Carrie Bonnington, who represents the Hollywood Casino, asserted that the focus could only be on alcohol served on the premises, not on the road conditions outside of the casino.

Hollywood Casino employs 1,000 people in an area which had only 6,000 residents in the 2010 census. For tribal members, the casino promises economic prosperity to some who lived below the poverty line.  But its large presence is unwelcome by many in the community, with over 100 people writing letters in protest of the liquor license being granted. 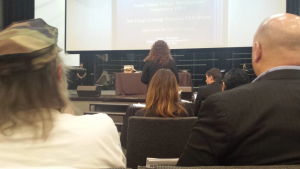 eft: Bonnington explains the casino’s policies to prevent DUIs and its contributions to the community with tribal member seated behind her.

The Hollywood Casino is along State Route 94, a winding two--lane road where traffic has nearly doubled in trips per day since the casino opened in this rural area. Barona Casino and Sycuan Casino faced similar backlash from the community when they sought liquor licenses, and both were granted restrictive licenses — in Barona, no alcohol can be served on the game floor and hours are restricted to between 5 and 10 p.m. These two casinos also had to wait a few years after opening before being granted a liquor license. Sycuan obtained a permanent license after it was shown that there was no increase in alcohol-related incidents in the area.

Concerns in Barona related to the twisting Wildcat Canyon Road. SR-94 is less curvy than Wildcat Canyon but one Caltrans engineer testified that the 94 has more points of conflict because more walkers, bikers, and cars use it. Eight childcare facilities share driveways with it.

William A. Adams represented several protesters. He asked the judge to at least make firmer restrictions. He described the current license, which does not have a 50/50 clause stating that beverage sales not exceed food sales or any restrictions on the hours alcohol can be served, as “lenient.” The 50/50 clause is common in non-traditional restaurant settings so that the business does not operate as a de facto bar.  He also asked that alcohol not be sold during school events such as football games at Steele Canyon High School when the 94 is already stressed. 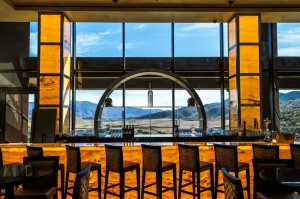 Photo, right: Bar adjacent to the Final Cut Steakhouse inside Hollywood Casino Jamul-San Diego is one of several places where alcohol is served.

The data on whether more crashes have occurred on the 94 since the casino opened is mixed;  the number of crashes with injuries is lower than the previous year,  but higher than the five-year average. However, the number of accidents involving driving under the influence (DUIs) has increased from six or seven in the year before the casino opened to 13 in the eight months after it opened--a serious concern for residents.

Bonnington claimed none of the DUIs were tied to the casino.  Chairwoman Erica Pinto also contests that any of these DUIs are linked to the casino. In a statement, she said, “As the longest residents of East County San Diego, the Jamul Indian Village is deeply concerned about the safety of our neighbors and our visitors to the Hollywood Casino Jamul-San Diego.” She has also previously noted in an interview with East County Magazine that there are new wineries along Highway 94 that also serve alcohol.

Bonnington stated that the casino voluntarily adhered to many restrictions not stipulated in the license because they offer a free shuttle service and do not sell alcohol between 1:30 and 10 a.m. They also have car-hailing services and traditional cabs at the facility. She detailed the security in each section of the casino who check IDs and are trained to detect impaired people. Adams said this demonstrated the feasibility of the business profiting with these restrictions in place, which is why they should be guaranteed in the license to assuage the fears of the community.

Last year, Hollywood agreed to donate $3.7 million to Caltrans for road improvement. The attorney for Supervisor Dianne Jacob and the County of San Diego asserted that the promised road work with the exception to the traffic light in front of the casino had not been started. He argued the judge should suspend the alcohol license until the breach of contract was fixed. But Bonnington stated that neither Caltrans nor the California Highway Patrol protested the casino opening and that this issue could not be decided in a liquor license hearing.

Funds from the casino have already provided two new fire engines for the area and keep CHP officers on the property 24/7.

The lawyers for Alcohol Beverage Control (ABC) said they conducted a thorough investigation before issuing the interim retail permit and stood by their original license. They also objected to the protesters submitting new documents and adding in evidence during the closing arguments when they had months to do so.

Of the nine casinos in San Diego County, Hollywood is the closest to downtown. It is run by Penn National Gaming, which has successful casinos across the US. Unlike many of the other casinos, it does not have a hotel where impaired people could spend the night. All employees go through training to make sure they do not admit or serve intoxicated people. The casino is limited to age 21 years and older, so there have not been issues to date with minors obtaining alcohol, especially since the casino caters to an older crowd.

A boisterous crowd observed the proceedings. Jamul residents shook their heads and muttered, and some even loudly said “no,” during the arguments. Tribal members murmured when Adams admitted he was not sure if a tribal council exists for the Jamul Indian Village (one does). When Webb concluded his statements, the audience majority broke into applause.

The judge closed the hearing by saying he has 100 days to decide, but to expect the judgment sooner. Whether the liquor license is approved or denied, a lengthy appeals process will most likely ensue.