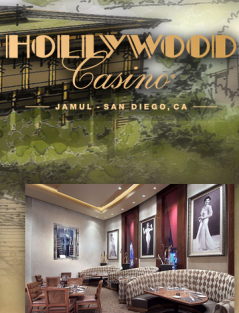 March 1, 2018 (Jamul) – In a press release issued tonight, the Jamul Indian Village Development Corporation, a wholly owned entity of Jamul Indian Village, announced termination of Penn Gaming and a transition to a new management team at the Hollywood Casino Jamul-San Diego, which will be rebranded as Jamul Casino.

The JIVDC press release describes the transition as a “natural next step toward economic self-sufficiency for JIV.”  Penn Gaming’s filing with the Securities and Exchange Commission on February 27, 018 does affirm that the decision for Penn’s local entity, San Diego Gaming  Ventures LLC, to cease management of the casino effective May 28, 2018 is a “mutually agreed” upon decision.

But the filing also indicates serious financial difficulties, including outstanding loans that Penn suggests it may be unable to collect.  The filing states:

SDGV previously made a $98 million loan to JIVDC for the construction, development, equipment and operations of the Casino and, in addition, provided additional delayed draw term loans and a limited completion guarantee for certain post-opening construction costs related to roadway improvements. As of December 31, 2017, these future funding commitments totaled approximately $29 million. On February 8, 2018, the Company issued a press release summarizing its results for the fourth quarter and year ended December 31, 2017. These results included an impairment charge of $48.5 million on the Company’s loan and unfunded loan commitments to JIVDC. Based on the pending termination of various agreements between the parties, the Company recorded additional charges of $29.4 million on the loan and unfunded loan commitments to JIVDC for the fourth quarter and year-ended December 31, 2017.

“SDGV’s loans and any future funding obligations are subordinated to the substantial senior debt on the property. SDGV’s loans to JIVDC remain outstanding; however, SDGV’s only material recourse for collection of these loans is from positive cash flow, if any, from the Casino operations or from the sale of these loans to a third party. The Company may realize little or no value for its loan, which could result in additional charges of up to $27.9 million (which represents the Company’s remaining loan and loan commitments, net of reserves, at December 31, 2017). Additionally, the Company may incur unexpected costs related to the termination and transition of its management contract with the Jamul Tribe.

The $460 million casino opened in October 2016 with a Hollywood theme but has faced challenges to attract and retain customers in a rural location in San Diego County, a county which already has several other successful tribal-run casinos, notably Viejas, Sycuan, Barona and Campo's Golden Acorn in East County, but has also seen two casinos in remote locations, Santa Ysabel and La Posta, close their doors in recent years.

The Jamul casino has long been opposed by many neighboring residents concerned primarily with traffic congestion on State Route 94.

Kim Hamilton, editor of the Deerhorn Valley Antler and an opponent of the casino, said of the news, “The situation is clearly not a rosy one— neither for the Jamul Indian Village, nor those holding its mortgage debt. It is a financial disaster.”  Hamilton recalls elderly tribal members displaced from their homes and disenrolled from the tribe over their opposition to the casino. She calls the tribe’s current troubles “karma.”

JIVDC Chairwoman Erica Pinto says in the press release, “Our announcement today represents an important step toward our long-held goal to manage our own casino. We are grateful to Penn National for all their hard work and leadership in bringing what was a very challenging development project to fruition”

The tribe is betting on a new management team to boost revenues.

Transition team leader David Patent, a former corporate vice president at Ceasars Entertainment and current CEO of Patent Enterprises gaming consultancy, states, “Most tribes in the Kumeyaay National self-manage their casino properties, and JIV is no different in that regard. JIVDC is fortunate to have a highly qualified, seasoned executive management team already I place, which will remain after the transition.”  He adds that the transition team has over 70 years of combined experience in casino development, operations and marketing.

No lay-offs or changes in staffing are anticipated during the transition, according to Chairwoman Pinto.  The casino has provided about 1,000 permanent jobs locally, with revenues helping to benefit healthcare, education and housing for tribal members as well as $25 million in donations to the County Fire Authority, $100,000 to the California Department of Fish and Wildlife, community causes, and road improvements though some of the latter remain uncompleted.

Members of the casino’s Marquee Rewards program will retain all earned comps and tier status with comparable or better benefits in a rebranded loyalty program. The casino features slot machines and live table games as well as multiple restaurants, bars and lounges.

“We look forward to Jamul Casino continuing to provide a high-quality gaming experience, and to building on our already strong relationship with our guests and employees,” Chairman Pinto e concludes, “We are also committed to being a supportive member of the community for generations to come.”

Updated 3/5/18 with a statement from Kim Hamilton, Deerhorn Valley Antler Editor, and clarifications on  tribal donations.

Should the Jamul casino fail completely, my first choice would be a East County Children's Hospital. Another alternative suggestion would be a location for the new US Customs & Border Protection Headquarters (now in the planning stages for a very large green field construction site in Delzura California) Chicago
What has happened to that casino is sad. A hard look into upper management would be a great place to start. That's all I can comment. I'm reading more about this casino lately.
If/when the JIV walks away from the enormous structure, could it be converted into luxury condos/apartments, plus retail space? There would certainly be sufficient underground parking.
The article, while mentioning the financial difficulties, seems to give more credibility to the comments of the JIV that the massive debt they have accumulated is a "step toward our long-held goal to manage our own casino." I know spin is a part of it all, but what about the lenders who hold some $400 million in construction costs? Are they left holding the bag? At least one other casino has simply walked away from debt, claiming that as a sovereign entity they cannot be sued. Are we going to see this kind of irresponsible behavior from JIV? JIV further claims, according to the article, that the name change is part of this plan. No... PENN is walking away from millions in losses, absorbing it rather than risking more, and is retracting both its name and all "branding rights." I look forward to more in-depth and comprehensive reporting on the various facets of this story. The situation is clearly not a rosy one— neither for the Jamul Indian Village, nor those holding its mortgage debt. It is a financial disaster. One final thought: RIP to the souls of all the elderly members "disenfranchised" by outside casino interests from the only community they'd ever known: RIP Karen Toggery, Adolph Thing, Jane Dumas. Few remain, and those that do, like Walter Rosales, were re-designated as "landless urban Indians" by the usurpers.Erica Pinto said JIV is a "young" tribe. No. JIV was established by 19 elderly residents as a half-blood Village. They well knew gaming was not what they wanted, and so they never sought status as a tribal reservation. Only when usurped by outsiders, did others claim membership as quarter-blood. It was as greedy and evil a takeover as could be imagined. And now the hens are coming home to roost. Karma indeed.

We quoted extensively from the filing which makes clear that the tribe owes Penn a lot of money that Penn fears it will have to write off and never recover. While Penn officially in its filing claimed this was a "mutual" decision, it's pretty obvious the company  must have wanted to cut its losses by getting out. Of course we need to quote whatever each side says officially, including the tribal chair.  But Penn hasn't actually said that, despite a headline in another publication implying that they had.

The concerns about lenders, venders, and other who could potentially lose money invested are legitimate questions to ask, and no doubt down the road when more information comes to light we will report on this further. There is indeed a sad history of the rift within the tribe and the ouster of some opposed to the casino in the past, before the current tribal leader came into office.

I don't know whatever happened to the old La Posta casino site after it closed, but the Santa Ysabel tribe is turning their closed casino into a marijuana growing and manufacturing enterprise, at least according to a press release they sent out a couple of months ago.

If the tribe is not able to turnaround the casino to be a financial success, another question will be what will happen to the building -- is there any potential use that would be beneficial to both the tribe and the community, or at least would not be detrimental?