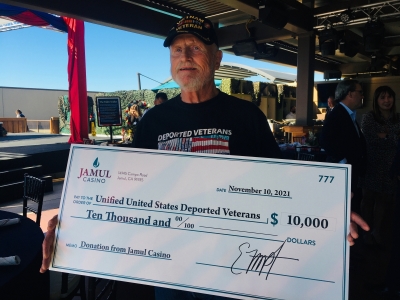 Photos by Elijah McKee and courtesy of Jamul Casino

Hear an audio version of this report which aired on the East County Magazine Radio Show on KNSJ, including excerpts of speakers, by clicking the audio link.

November 10, 2021 (Jamul) - “We always say ‘Everyone comes home.’ The reality is, hundreds came home, and then we deported them,” said Nathan Fletcher, Chair of the County Board of Supervisors, as he addressed the crowd at Jamul Casino’s annual Veterans Day Celebration.

Jamul Casino and the Jamul Indian Village tribe of the Kumeyaay Nation hosted the lunch event at its Rooftop venue to honor veterans in their community — both employees and tribal members — as well as to donate to a veterans’ organization.

This year, the organization selected was Unified United States Deported Veterans (UUSDV), a chapter of Veterans for Peace. The $10,000 donation from Jamul Casino was awarded by Mary Cheeks, President and General Manager, and handed to Jan Ruhman, a project coordinator with UUSDV for the border region.

“We really want to thank this tribe,” Ruhman said. “This money means a great deal to the office and the operation on the other side of the border. It takes us about $25,000 to $30,000 to keep that operating every year.” 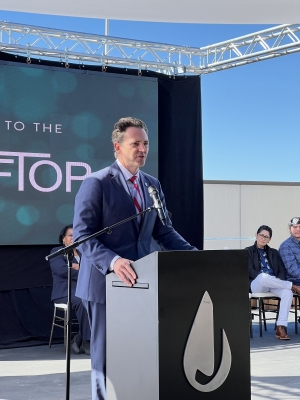 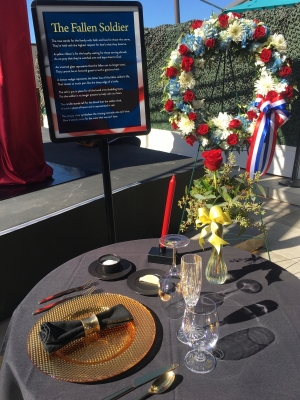 , founded the Honorably Discharged, Dishonorably Deported advocacy group and also advocates to reduce the stigma of PTSD.  He spoke passionately at the event.

Most Americans have no idea that we are deporting honorably discharged members of the US military,” he said. “They were promised citizenship in exchange for their service to our country,” he added, “and our country failed them.”

Erica M. Pinto, Chairwoman of the Jamul Indian Village, commended UUSDV during the event. “It serves as a resource for deported vets,” she said, “assisting them integrate into their new community, while searching for legal avenues to return home to the U.S.''

As odd as it may be that a person in the military could be barred from living in the very country they served, that is currently by design, according to Ruhman. He explained how in 1996, Congress passed the Illegal Immigration Reform and Responsibility Act, which swept many people into a deportable demographic, regardless of former armed service enlistment.

“Everyone in uniform is a US national. But the cloak of nationalism is taken off them when they’re out of the military,” said Ruhman. “They dangle that carrot in front of them,” he continued. “They don’t care if you’ve got a Bronze Star or Purple Heart.”

Since 2007, the advocacy work of UUSDV has primarily sought to change the Congressional legislation, because the 1996 law took the power out of the command of the courts. Yet Ruhman and others have been at it for 14 years and have seen little federal support, despite the backing of some in power such as Supervisor Fletcher. “We’re aware of about 300 vets who have been deported into Mexico,” he said. “I know guys that have been down there for 20 plus years. Guys that have died down there.”

Most deportations are caused by minor offenses that attract attention from ICE, and no judge or jury can stop them because of the current legislation. Ruhman condemned this low bar f 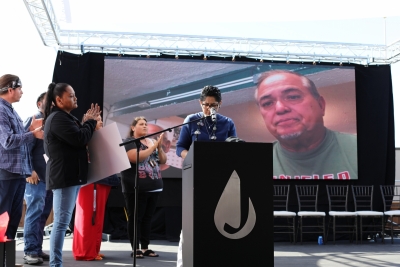 “We know 20 percent are suffering from post traumatic stress, and another 20 percent from brain injury,” he said. “They shouldn’t be deported.”

Also addressing the crowd on Wednesday was Robert Vivar, the organization’s co-director who is based in Tijuana and spoke via Zoom. Vivar was deported there in 2013 after living in the United States since he was six years old — but this Veterans Day, he was repatriated back into the United States.

“We feel that when a person took that oath of enlistment,” Vivar said, “when they raised the right hand — they proved beyond a doubt their loyalty and allegiance to the Constitution of the United States, and should be considered a national, if not a citizen.”

“They say it’s an immigration issue,” added Ruhman. “I beg to differ. It is a veteran’s issue. How do you tell someone they’re a national when they deploy and then when they come home they are deportable?”

Following the awarded donation, Jamul recognized 36 employees and four tribal members with certificates and gift bags. They have served across the Air Force, Army, Navy, and Marine Corps, and they work throughout many of the Casino’s departments. Special applause was held for Vietnam veterans and for Indigenous women veterans.

“There is a rich and honorable service amongst our Native American communities when it comes to stepping up for a country that often does not deserve the appreciation that it gets back,” stated Fletcher. “They’ve fought in every war we’ve ever had,” he continued, “at five times the national average.” 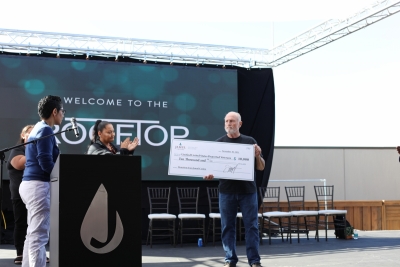 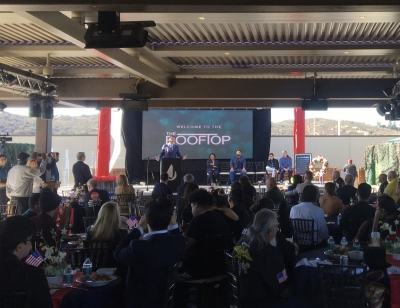 “This tribe, this nation, has honored them for their service, something their country has failed to do,” said Ruhman. He cited slogans: “‘Thank you for your service,’ ‘support the troops,’ ‘honor our veterans,’" then asked, “What are we doing to these guys?” referring to those who have been deported. “It rings hollow to me.”