However some residents think the mitigation doesn’t adequately address all the problems, particularly near Steele Canyon High School and on Otay Road.  Steele Canyon road is especially important because of all the foot-traffic and teen drivers; Otay Road is the shortest distance to the casino from the Otay border crossing. 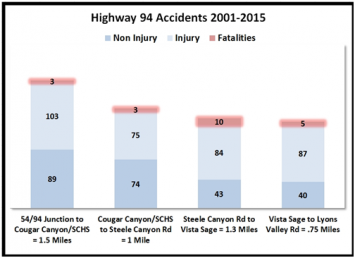 The Jamul Action Committee, which opposes the Jamul casino, contends that the proposed $16 million is not enough to cover the proposed mitigation and that taxpayers will pick up the balance.

The  JAC has filed numerous lawsuits that have not yet proven successful though the suits remain pending in the courts.

The JAC is now suing Caltrans and compiled a chart showing accidents on key sections of Highway 94.

While we appreciate your posting a story about the meeting that took place last night, the information is not correct. The meeting was sponsored by Caltrans, Penn National and the JIV. This was the second information gathering for the proposed SR 94 Improvement Project. The Penn and the JIV have not spent any money on the project other than the proposed mitigation. The proposed $16 million is not enough to cover the proposed mitigation. CA taxpayers will have to pick up the balance. Caltrans refuses to tell us what the total cost of the project will be. Caltrans has not addressed Cougar Canyon/Steele Canyon High School intersection even though the community and drivers of SR 94 have repeatedly asked for a plan to keep our kids safe. They have repeatedly ignored all comments and suggestions. Caltrans has not addressed any impacts to SR 94 south and east of the JIV project even though the community and drivers of SR 94 have repeatedly asked for mitigation especially for Otay Lakes Road and Honey Springs Rd intersections. Penn National and the JIV have told Caltrans they don't expect any traffic from the east. This is completely false and shows that Caltrans is not listening to those that use SR 94. Caltrans is only listening to what Penn National and the JIV want. The pending lawsuits are still in the courts. Caltrans, the US Department of the Interior, Bureau of Indians Affairs, and the CA Wildlife Conservation Board. JAC will continue to fight for the safety of our children and our community. Please correct the information. Thank you.

JAC - I've corrected the story to note that Caltrans is the sponsor.  We heard about this only from a JAC email blast, not Caltrans.  Your email blast did reference CalTrans which we apologize for missing, but your email notice made no mention of the Jamul Indian Village or Penn National being sponsors and I don't have time to indepedently verify that before the meeting as I'm heading out the door for another even..  We added your concern that the $16 million is inadequate for the mitigation; readers can get the rest of your concerns in the comment you posted.