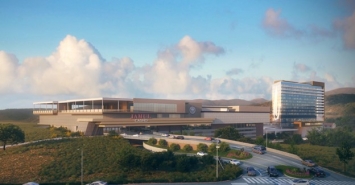 The hotel would be 16 stories with floor-to-ceiling glass; the project would also include an indoor-outdoor event center and additional parking, but no new gaming.

ECM reached out to Chairwoman Pinto to request an interview. She initially agreed, but cancelled due to a trip to Washington D.C. to meet with Department of the Interior Secretary Deb Haaland on other matters.  ECM sent written questions and requested a new interview date, but no response has yet been received. The Jamul Casino employees approximately 1,000 people and has provided economic security for the Jamul Indian Village of California's tribal members, many of whom lived in poverty in the past. The new project, if built, would significantly expand employment opportunities in the area as well as economic growth for the tribe.

County planner Scott Christman has said the project does not need approval of county Supervisors or the Governor, and the tribe has previously indicated it hoped to begin construction this month. However the the JDCPG contends that since the casino was built based on certain conditions and legal requirements being met, some of which have not been completed, the project thus does need approval/cooperation/participation of both Supervisors and the Governor.

The TEIR states that there is no way to mitigate aesthetics and environmental impacts. The report focused on a limited geographical area near the casino but gave only “scant mention” near the end of the report to the adjacent Rancho Jamul Ecological Reserve and the Hollenbeck Canyon Wildlife Area nearby, which are managed by the Wildlife Conservation Board of California. The JDCPG voiced concern over impacts on wildlife from lights and noise.

The JDCPG questioned findings of the TEIR on acoustics, which focused on nearby homes at ground level, not hillside residents or how sound travels across all areas of the valley. Planners also raised concern over potential drops in property values.

Planners found the traffic analysis flawed noting that traffic has frequently been bumper t bumper since the casino was built in 2016. “This is not only inconvenient, but dangerous,” their letter states, citing fire evacuation concerns.

Significantly, the JDCPG notes that when the casino was approved, the County and Cal Trans required certain roadway improvements to be made, however many of those have not been completed. Planners argue that those changes to State Route 94 should have to be finished before any new project is considered or built.

They also object to the tribe’s rationale for trying to exempt the project from the state’s new Vehicle Miles Traveled requirements. In addition, planners took issue with the tribe’s assertion that the project will generate “no extra traffic”, noting this is a “strange assumption” to make given that the project calls for a 6-story parking garage that would handle substantially more vehicles than current parking accommodates.

The TEIR is lacking a Wildland Emergency Evacuation Plan (WEEP) required under the California Environmental Quality Act despite the casino’s location in a very high fire hazard severity zone. The TEIR assumes casino patrons will shelter in place (as has occurred at other area casinos when fires occurred), but planners fear some patrons would seek to race home to families, creating traffic congestion and potential “panic.”

Planners note that the Lilac Hills Ranch housing development for 1,700 homes was rejected due to lack of adequate wildfire evacuation routes.

If the project is built, the planners ask the casino to commit resources to law enforcement to address any added crime. A retired U.S. Customs Service worker who spoke during a hearing voiced concern over the prospect of a hotel near the border perhaps becoming an inadvertent haven for human traffickers or prostitution, as well as drugs.

16 stories floor-to-ceiling glass sounds like a disaster for migrating birds.