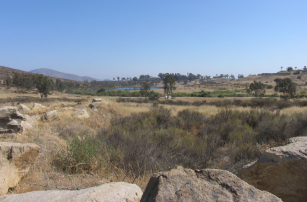 March 29, 2018 (Jamul) -- The latest Jamul-Dulzura Planning Meeting on Tues., March 27 was dominated with discussion about a proposed development on Village 14, Planning Areas 15 and 19. The proposal would bring over a thousand new homes into an unincorporated area of 6,163 people, as of the last census.

Following a presentation from San Diego County Project Manager Greg Mattson, the group raised several key objections. They rejected claims there will be no impact on traffic and objected to demands that two lines of sewer be brought in.

In their minutes, the planning group pointed out the traffic study only looked at the impact of Proctor Valley which heads south, rather than the westward road of State Route 94— which is already under stress from Steele Canyon High School and the Jamul Casino (formerly Hollywood Casino). They felt the plans to add loops inside the housing development and extend roads would not adequately mitigate the increased traffic.

The Jamul-Dulzura Community Plan currently calls for no sewer in the area. Many members said the two sewer lines would be unacceptable. Some even requested the development group go back and find a way for the proposal to work on septic rather than sewer.

The most complex additional issue is the planned school, which touches four school districts that will lose out on funds without those students. Chula Vista is likely to incorporate the school, although Grossmont and Sweetwater may have jurisdiction as well. Former Jamul School Secretary Janet Mulder pointed out that Jamul is seeing a drop-in enrollment and could accommodate new students without even needing to build a new school.

As previously reported, the proposal includes 1,119 homes on approximately 1,284 total acres, of which 860 acres would be developed. The site will also include an elementary school, fire station, 7.2-acre village green and mixed-use site with commercial business spaces. In addition, there will be three public parks, three swim clubs, trails and other recreational facilities.

The county’s development plan, which requires more housing in Jamul, does not allow for the project to be rejected outright as the Honey Springs development was.

The planning group said their options include recommending the project is built on other land, demand the housing be less dense and consider aesthetics, or widen Proctor Valley to four lanes with the same amount of housing. Member Jean Stouf found the low-density option attractive, as it keeps the county’s demands while maintaining the character of the area. However, some member also lashed out at the county for not being willing to provide flexibility and other alternatives to the stringent proposal. While the county is backing the project, nothing has been officially approved yet.

The planning group is asking for member of the community to respond to the proposal. Public comments are accepted until 4 p.m. on April 16th. They can be emailed on this form to Gregory.mattson@sdcounty.ca.gov.

View the County’s public review webpage on Village 14, Planning Areas 15 and 16, with all pertinent documents including the draft EIR here:  https://www.sandiegocounty.gov/pds/ceqa/OtayRanchVillage14.html

Not sure where "Candlestick" lives, but there will be major pushback if they put a "paved highway" through long term residential neighborhoods, the San Diego National Wildlife Refuge and Rancho Jamul Ecological Preserve which is what exists along a big portion of Proctor Valley Rd now. 4 lanes? Are you kidding? This is Jamul, not Eastlake next to a toll road. For what? So another Developer can make big bucks, create more traffic and never live in the mess they create, we can have another ticky tacky Mc Mansion box clone home "community" (AKA mini City) with more gridlock (while touting the guise of a "shortcut" through Proctor), no infrastructure ever to support it, and more precious, quality of life open space forever gone. We have all been brainwashed into this "we need more homes built", when look how many alone are for sale in just Jamul?
I'm intrigued by the idea of developing Proctor Valley further east as, if it made it's way all the way to CA-94 as a paved highway, it would dramatically change the traffic flow around the mountains west of Jamul. For example, right now, it takes the same amount of time to go from Jamul post office to Otay Lakes Road to Eastlake as it does to go to Jamacha Rd to CA-125 to Eastlake. Adding this third path could either worsen or better traffic on HWY 94.. I recommend further study with recommendations. Cannot speak to the sewer issue.
Mr. Mattson , As a long time Jamul resident I am opposed to the Proctor Valley housing project that would increase Jamul's residences by almost 50% and increase Jamul's population by an estimated 30% to 40% . Density like this only further exasperates traffic in SR 94 which is statistically the most dangerous SR in the state of California, with one injury accident every 6 weeks and 1 death every 6 months for the last 10 years running.