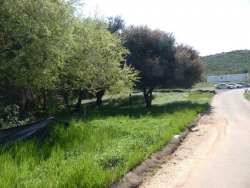 Labor and business groups voice support for casino jobs;  residents ask why community was excluded from meetings with Governor's staff, including a site visit

October 12, 2013 (Jamul) – A senior advisor to Governor Jerry Brown, Jacob Appelmith, has confirmed in a letter to Jamul Indian Village Tribal Chairman Raymond Hunter that the tribe has met requirements of the Tribal-State Gaming compact for a proposed casino on Highway 94 in Jamul.  “As you are aware, the State supports the Tribe’s efforts to mitigate any and all of the significant off-Reservation impacts,” the letter continued.

Chairman Hunter praised the Governor’s “collaborative spirit toward making our vision become a reality” in a press statement.   The tribe has committed to significant mitigation, including widening portions of Highway 94.  The tribe will be required to pay traffic mitigation costs into an escrow fund prior to construction.

But opponents of the project are voicing criticism of revelations in Appelsmith’s letter that  the Governor’s staffer has met with Hunter and other tribal representatives “on approximately 20 occasions during the past three years to review and discuss the Tribe’s progress.” The Governor's aide further states that he personally inspected the project site and toured State Route 94, as well as meeting with the California Department of Transportation (CalTrans) and Supervisor Dianne Jacob.

The website Jamulians Against Casinos (JAC) has posted a copy of Appelsmith's letter, along with some probing questions.

JAC  contends that increased traffic from the casino can’t be mitigated. The group further contends that the process has not been transparent due to “closed door meetings” by the Governor’s staff with key decision makers while community members were excluded.

Appelsmith serves as director of the California Department of Alcoholic Beverage Control in addition to working for the Governor. He previously served as chief of the California Bureau of Gaming Control from 2008 to 2001.

In September, the Jamul Action Committee and the Jamul Community Church  filed a lawsuit against the National Indian Gaming Commission, the Bureau of Indian Affairs and several others in federal court in Sacramento, seeking to halt the project.  Plaintiffs contend that defendants improperly took lands into trust for the tribe and found lands eligible for gaming, removing the land from state and local jurisdiction).  The suit also claims the plan violates environmental laws.

The project would include a $350 million casino with restaurants, underground parking, and a fire station on-site.  The tribe has reduced the height and footprint of the original project proposed, also incorporating water and wastewater reclamation facilities, an earth tone palette and downcast lighting in deference to community concerns.

Eric Lund, General Manager of the San Diego East County Chamber of Commerce, said the Chamber will be reviewing the proposed project with its members and local communities. He noted that the project would provide “thousands of much needed jobs in our region.”

Tom Lemmon, Business Manager of the San Diego County Building and Construction Trades Council, called the prospective jobs a “welcome sight for working families across the region” that would create apprenticeship opportunities and jobs during a period of economic recovery.