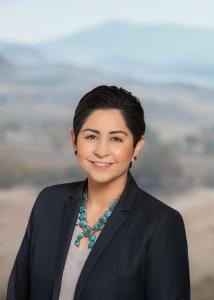 June 25, 2021 (Jamul) - The Jamul Indian Village announced the results of their 2021 Tribal Council elections that were recently concluded.

Chairwoman Erica M. Pinto was re-elected to another four-year term, as were Councilmembers Teresa Cousins and James Cuero III.

There was a tie vote for Vice Chairperson which will require a run-off election to be held on July 21st between Michael Hunter and Richard Tellow.

“It is deeply humbling to be re-elected as Chairwoman of the Jamul Indian Village,” said Chairwoman Pinto. “I look forward to working with our incoming Council on the priorities of financial stability, homeownership for our people, diversifying beyond gaming and acquiring land to establish a community for our tribal members.”

In addition to weathering the COVID-19 pandemic, the Tribe has recently announced the refinancing of their casino debt, which resulted in significant financial savings, as well as several other fiscally responsible initiatives to reduce costs, and improve government services, which will benefit tribal members.

“It has truly been an honor to serve my tribe for the last 24 years,” continued Chairwoman Pinto. “For the Jamul Indian Village, it has been an era of tremendous change and growth, including the opening of our casino, which has led to better financial footing and better services to our members. I look forward to four more years and working tirelessly to raise our Tribe’s profile and helping us achieve our long-term goals.”

About Jamul Indian Village of California

Jamul Indian Village of California is one of 13 federally recognized tribes that are part of the Kumeyaay Nation, with roots in east San Diego County going back 12,000 years. The Tribe uses revenue and resources from Jamul Casino to fund educational opportunities, healthcare, and housing initiatives for its members, and projects that benefit the surrounding community, through a tribal-state gaming compact with the State of California signed in 2015.