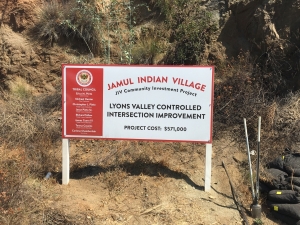 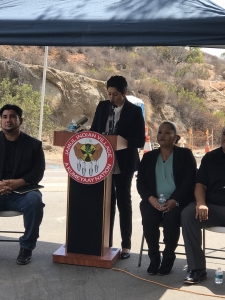 "For years, the Jamul  Indian Village, the Board of Supervisors and the community have said that the roads out here need to be improved," Jamul Indian Village Chairwoman Erica M. Pinto said. "Our growing population can't rely on the roads of the past and the dangerous intersections like we have right here in our community." She added, "Jamul Indian village has been pleased to help support these roadway improvements, because we know safer roads save lives, connect us to our loved ones and improve our quality of life."

While some residents opposed to a casino in the region have voiced concerns over the casino opening without all of the promised road improvements completed in advance, casino revenues were needed to fund the upgrades, the tribe has indicated.

"Today is a testament to our success," noted Chairwoman Pinto. "In the nearly two years that the casino has been open, we've been fortunate to be able to use the revenue to invest back in our community."  That investment has included delivering two new, state of the art firetrucks to Cal Fire that were "put to good use during fire season last year," Pinto noted, adding that millions of dollars in funding for equipment, personnel and training have been provided by the tribe to mprove emergency services for all residents in the community.

Among the sight distance improvements that will be made are a new signal and safety enhancement measures for pedestrians, bicyclists, and all other road users.  Warranted traffic signals at intersections reduce the number and severity of collisions by controlling intersection access and properly posted all-way stop controls assure that reasonable drivers enter the intersection at a low speed and have more time to take heed of the traffic situation.

"While there is still work to be done and as we've said from the beginning, the Jamul Indian Village wil continue to work with the Board of Supervisors, Caltrans and the community to make sure the road improvements are made and that our concerns are addressed." The groundbreaking, she concluded, "just goes to show that when we all work together with a common goal in mind, our community can achieve great things." 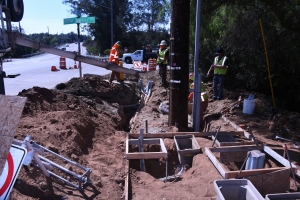 Jamul Indian Village (JIV) is one of 13 federally recognized tribes that are part of the Kumeyaay Nation, with roots in east San Diego County going back 12,000 years. JIV’s casino on its reservation in Jamul supports more than 1,000 permanent jobs in the region, according to the Tribe. The Tribe uses revenue and resources from the casino to fund educational opportunities, healthcare, and housing initiatives for its members, and projects that benefit the surrounding community, through a tribal-state gaming compact with the state of California signed in 2016.