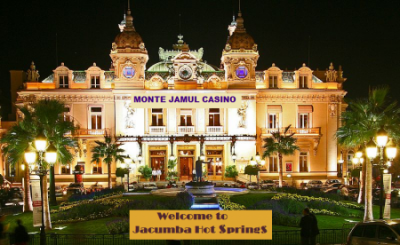 A Special Report by Rollin Dice

April 1, 2013 (Jacumba Hot Springs) – The Jamul Indian tribe announced today that tribal leaders have reached an agreement to build an off-reservation casino at the site of the former Hotel Jacumba.  The original hotel, once a magnet for Hollywood celebrities in the 1930s and 40s, burned to the ground decades ago.

“I’m thrilled to welcome the Jamul Indians to Jacumba Hot Springs.  This fulfills my vision for revitalizing our community with a Monte Carlo-style luxury hotel and casino,” said Dave Landman, who recently acquired  most of the town  including the historic downtown district and the site of the old hotel.

Landman has been working to restore the Jacumba Hot Springs Resort and led efforts to change the town’s name from Jacumba to Jacumba Hot Springs. He has also shared his vision to add art galleries, gift shops and a winery to attract tourists.

He also owns the clothing-optional De Anza Springs resort, but been adamant that the town will not be converted to a nudist community.  The successful business entrepreneur left the door open to creation of a clothing-optional room for high rollers in the casino, however, noting one key advantage.”No one could hide any aces up their sleeves.”

A Jamul tribal leader told ECM the off-site casino will “bring economic prosperity to our tribal members” while respecting the views of neighbors in Jamul who want to retain the rural character of that community, as ECM previously reported.  He also revealed plans to allow the controversial Honey Springs hunting dog ponds to be built at the existing Jamul reservation, which will be available for use by both tribal members and area residents as well as local sport hunting clubs.

Jamulians Against the Casino praised the news.

“We’re overjoyed that a high-rise casino will not be in our backyard,or even a low-rise one,” a press release issued by the group stated, citing traffic concerns. “To the residents of Jacumba Hot Springs and Monte Jamul Casino patrons, we say, `Good luck!'"