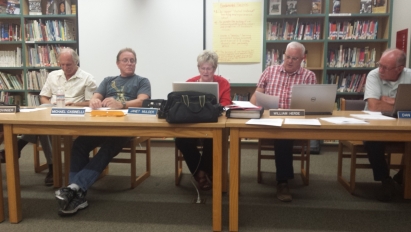 August 24, 2017 (Jamul) — San Diego Senator Ben Hueso (D-San Diego) sponsored SB 649, which would let technology companies install 5G mini and micro cell sites on any government property without county or city oversight. The usurpation of local authority is already sparking protest from his home district: in its Aug. 22 meeting, the Jamul planning group joined other city councils as well as the County of San Diego in opposing the bill, which will be heard by the Assembly Appropriations Committee on Sept. 23.

The new 5G technology provides faster connectivity from smaller units than traditional cell towers. It will also be necessary to advance other technologies such as driverless cars as it enable car-to-car communication. The downside is that these small units have short ranges which require many more to be installed.

The planning group would normally make sure none of the cell sites inappropriately blocked anyone’s view and would ensure they were spread out more, but the bill takes away that level of oversight.

The Jamul Planning Group drafted a letter during the meeting and voted to send it to Dianne Jacob to assist her as makes a presentation to Sacramento officials about why the County and cities within the County oppose the bill. The letter states that the Jamul board could not support the bill in its current form because it encroaches on local authority and had no provisions about the aesthetic impact of the cell gear.

110 other cities have already opposed the bill. Reinette Senum, City Council member from Nevada City, testified in April that “This is nothing short of the telecommunications industry [and the State of California] basically hijacking and staging a hostile takeover of our local governments—cities and counties. It will remove local authority and also risk property rights.”

In the discussion, Chairperson Michael Casinelli and Member Dan Neirinckx brought up that the review process currently in place has made better towers than when they were first proposed. Member George Novinger dissented because the Board, in his view, can spend too much time reviewing cell towers. “I have real reservations about standing in the way of modern life and innovation,” Novinger said, “I would be more than happy to give people what they want in the 21st century.”

Currently, Verizon has the most coverage in Jamul, with AT&T attempting to catch up. There are still many parts of the rural area in which there is sluggish or no cell service at all. For many residents, faster and more consistent cell coverage would be a welcome addition.

Other people have different concerns than merely the aesthetic problems of the units. Donna Tisdale, chair of the Boulevard Planning Group, is concerned about the health risks  that wireless radiation entails. She cited the opinion of cancer researcher Dr. Anthony B. Miller that radiofrequency (RF) radiation, which is emitted by cell phones and towers, is a “Group 1 carcinogenic to humans.” The World Health Organization already classifies RF radiation as a possible carcinogen to humans.

An additional concern with the bill is that it would reduce people with Electromagnetic Sensitivity (EMS)’s access to housing free from radiation. EMS is recognized by the U.S. Access Board and is protected under ADA. In 1998, three percent of Californians had the condition.  Rural Jamul may be a haven for those suffering this condition.

Despite Novinger’s reservations, he voted in favor of the new letter drafted by the group, which cited aesthetic and local rights concerns with the bill in its current form.

The public can send comments about the bill to County Supervisor Dianne Jacob or Senator Ben Hueso before the Sept. 23 hearing.

Update:  Below is a copy of the board's letter to Supervisor Jacob:

The purpose of planning and zoning is to promote and preserve the quality of our communities. JDCPG supports the initiative to bring enhanced services to the community and desires that it be done without damaging the rural character which makes our community attractive.  The siting and construction of mini cell and micro cell installations needs to continue to be subject to review as a discretionary permit.

Jamul has suffered for many years without cellphone service, particularly in the remote areas outside the community. We have pounded on business doors and politician's doors for years trying to bring light to our darkness. Now we have an opportunity to have not 3G, or 4G, but 5G cellphone and the internet access it comes with to us... YEAH! But lo, what do I read today but the planning committee has come out against the very thing we have been crying in the wilderness about for a long time?? What in the world are these people thinking? I suggest they may not either know the harm they do, or they know but want to deny this vital service from those who need it worst. Their stated reason is petty and puny, and I do not feel it accurately represents the feelings of those who are affected the most. There should be more study, reflection, dialog, and census of everyone, not just the select few who are hand picked by the very politicians we choose to represent us fairly. I don't care if someone thinks it may not be "purdy" against their streetlight. YES on cellphone service!