Alexis Swanstrom to represent California in National Pageant
July 5, 2011 Jamul -- On Friday, July 8 family and friends of Alexis Swanstom, Miss California Teen USA, of Jamul will gather at 6:00pm at BJ’s' Restaurant in Grossmont Center to wish her well as she heads to the Bahamas to compete for the title of Miss Teen USA.  Miss California USA, Alyssa Campanella recently won the Miss USA title and supporters of Alexis are hoping California will have the same luck in the teen contest.
Alexis Swanstrom recently graduated with honors from Steele Canyon High School.   She will continue her education at University of San Diego in the fall where she will be a Communications Major.  She will also be part of the Dance team.  She has been very involved in high school where she was Advance Dance officer, Dance team Captan and a Varsity Cheerleader.  Alexis is a Cougar Crew Leader and involved in Class Council. Dancing since the age of three, she has appeared on America's Most Talented Kids and was ranked fifth in the world at the Worlds Tap Dance Championships in Germany.  Alexis has been modeling in fashion segments on Fox and the CW and has modeled in many runway fashion shows.  She has held the titles of Miss San Diego's Outstanding Teen 2007, Miss Rancho Jamul Teen 2010, Miss Greater San Diego Teen USA 2010, and is currently Miss California Teen USA 2011.  Alexis is competing for the title of Miss Teen USA on June 16th in the Bahamas. 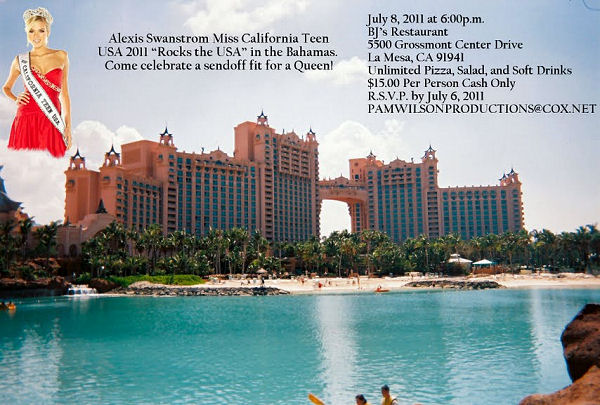 Post is nicely written and it contains many good things for me. I am glad to find your impressive way of writing the post. Now it become easy for me to understand and implement the concept.