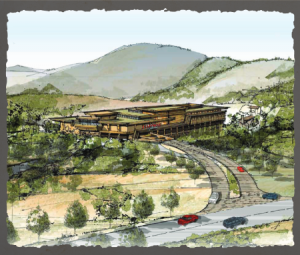 September 12, 2013 (Jamul) – The Jamul/Dulzura Community Planning Gorup has received a Notice of Preparation of a Draft Environmental Impact Report for roadway improvements to Highway 94.   These would include widening of the highway to provide access to the Jamul Indian Reservation, where a casino is proposed, as well as improvements to intersections of Highway 94 and Jamacha Boulevard, Jamacha Road, Steel Canyon Road, Lyons Valley Road, and Maxfield Road.  deerhornvalley.net/CaltransNOP.pdf

“These improvements would be necessary to help handle the 10,000 extra casino-bound vehicles daily,”  Deerhorn Valley Antler editor Kim Hamilton said in an e-mail.

Hamilton has raised concerns over casino traffic increasing accidents and traffic delays, potentially impeding evacuations during wildfires or other emergencies.   She has urged a strong community turn-out at the meeting.

The project has generated substantial community opposition largely centered around traffic concerns since the tribe reduced the profile of its original plans for a high-rise and made other accommodations seeking to address community concerns.

The tribe contends that the proposed 203,000 square foot casino will  “benefit the community and the local economy by providing more than 2,500 construction and permanentjobs to the area, while making significant upgrades to the safety and convenience of SR 94 and other roads and intersections in the area.”

For documents and arguments in favor of the proposed casino from the Jamul Indians, see: http://jamulindianvillage.com/documents/

For arguments against the casino, see Jamulians Against Casinos: jacjamul.com