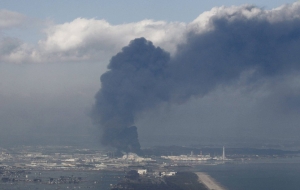 Update March 12, 2011 (8 a.m.) -- An explosion rocked the nuclear plant at Fukishima Daiichi during the night, sending plumes of smoke billowing forth. However Japanese authorities say the fire was at a pumping station that failed, not the reactor core.

The threat of a melt-down remains as officials try to cool reactors at two facilities damaged by the earthquake (upgraded to a 9.1), tsunami and now, fire.

The evacuation zone has widened to 12.5 miles and iodine tablets will be distributed to residents to try and prevent excess radiation absorption; radiation levels 1,000 times normal have been detected as well as cesium, a sign that some fuel in the Fukishimia reactor may be melting. If the structure walls of the reactor hold, a Chernobyl worst-case scenario may yet be avoided, experts say.

Scroll down for more on this emerging crisis.

March 11, 2011 9:30 p.m. (San Diego) – CNN reports that Japanese authorities have declared a state of emergency at five nuclear power plants. According to Reuters, Japan has hours, at most, to find a way to cool the reactors' core or face nuclear meltown.

A  radiation leak has been identified at one plant, with radiation 1,000 times normal levels. Thousands of people have been evacuated as authorities scramble to stave off Armageddon in a nation already reeling from the dual disasters of an 8.9 earthquake and tsunami with a 30-foot wave that struck Japan yesterday. Five nuclear plants in the nation are shut down, leaving millions without power.

Japan's Nuclear Safety Commission is now reporting cesium detection -- which may mean a nuclear core meltdown has begun at Fukushima.

What is a nuclear meltdown? Wikipedia has a  primer.

The crisis also raises concerns about the safety of U.S. nuclear facilities in a natural disaster, including San Onofre, located near an earthquake fault along the shore in northern San Diego County.

For details on plant locations and updates, view these sites:

ANALYSIS: JAPAN MAY HAVE JUST HOURS TO PREVENT NUCLEAR MELTDOWN
March 11, 2011 (Reuters) -- (Reuters) - Japanese officials may only have hours to cool reactors that have been disabled by Friday's massive earthquake and tsunami or face a nuclear meltdown.
http://www.reuters.com/article/2011/03/12/us-japan-quake-nuclear-us-anal...

Very Good! These are wonderful! Thank you for sharing!