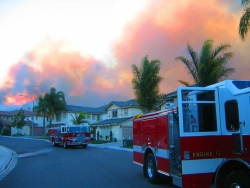 September 13, 2012 (San Diego’s East County) – As fire parcel fee notices arrive in the mail for rural homeowners in East County, the Howard Jarvis Taxpayer Association has filed a lawsuit contending that the fee is an illegal tax that required a two-thirds majority of the Legislature for passage.

If the gorup prevails, a court may order refunds. The organization’s website, FireTaxProtest.org site has a Petition for Redetermination that it suggests property owners mail in with their payments:  http://firetaxprotest.org/?page_id=13.

Governor Brown has contended that the fee is needed to help fund firefighting efforts in the wake of state budget cuts.  Some rural homeowners have opposed the measure, which imposes $150 per inhabited structure within the state responsibility areas under Cal-Fire jurisdiction. So have some fire districts fearful that the state fees may make it harder to pass their own revenue measures in the future.

Meanwhile the federal government has indicated that 2012 is shaping up to be one of the worst years on record for wildfires. The nation is in the worst drought since the Dust Bowl of the 1930s and our region is deemed to be in severe drought conditions.