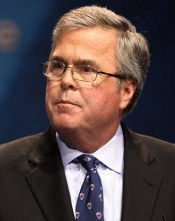 By Joe Gandelman, Editor in Chief, The Moderate Voice

Reprinted with permission from The Moderate Voice, a member of the San Diego Online News Association (SDONA)

December 28, 2014 (San Diego)--Yes, former Florida Gov. Jeb Bush is a contender for the Republican Presidential nomination, even if he has not officially announced. Bigtime. A new poll shows his leaping to the top of the GOP presidential poll pack:

Former Florida Gov. Jeb Bush has opened up a large lead over the Republican presidential field, according to a new poll.

Bush wins 23 percent of the Republican vote in the CNN/ORC polls, well ahead of New Jersey Gov. Chris Christie, who gets 13 percent.

Bush announced this month that he is will “actively explore” a presidential run, and this is the first poll since his announcement. Bush’s entry into the race was expected to hurt Christie, who is also seen as a favorite of the GOP establishment.

Bush’s lead is up to 10 points, compared to just a four-point lead in a Washington Post/ABC News poll in mid-December.

This also means he’ll have a big, fat political target on his back as other GOPers and segments of the party try to stop Bush and what basically would be a second Bush Oval Office restoration. Most interestingly: he most hurts New Jersey Gov. Chris Christie who has rebounded from “bridgegate” (nothing was found to directly link him at all to the political payback scandal which entailed his political operatives deliberately slowing down traffic on the George Washington Bridge to allegedly punish a mayor who didn’t endorse Christie’s re-election bid) — and shows the strength of conservative pediatric neosurgeon Ben Carson…who to many is a Twlight Zoner he’s so far out there to the right.

Christie is the main possible candidate to see a bump in this poll, other than Bush. Christie is up to 13 percent from 9 percent in the last CNN/ORC poll, in November.

By contrast, Carson and Huckabee, the next two candidates, both fell by four points since that November poll. Paul fell two points, from 8 percent to 6 percent.

Sen. Marco Rubio (R-Fla.), who has received a burst of attention by leading the opposition against President Obama’s move to open relations with Cuba, is up two points since November, though he is still at just 5 percent.

The poll shows that despite Bush’s lead, there are still doubts among Republicans about some of his policy positions. Bush has called for candidates not to try to conform to the views of the Republican base, saying a candidate should “lose the primary to win the general without violating your principles.”

And then there is the non-news of the poll: the Dems still overwhelmingly like former Secretary of State Hillary Clinton.

Bush will have his work cut out for himself in winning the primaries and unifying the GOP. Conservatives are already gearing up for battle with him.

Talk show host Mark Levin (who calls Joe Scarborough of MSNBC’s “Morning Joe” “The Morning Shmoe”) has steadily, consistently, and unfailingly blasted Bush on all occasions, painting him as a far too moderate member of a family that feels it’s entitled to the White House. On a recent broadcast listened to by yours truly on XM’s Patriot Channel, he repeatedly asked his listeners what it says about the Republican party that it could seriously consider handing over the White House to the same family for a third time. His argument was: what has the party become if it feels it must turn to one family over and over when there are so many other qualified people, particularly governors. And then he rattled off how bad the two previous Bushes were for the conservative movement.

Expect more if Bush gets the nomination. The fascinating part will be whether Bush feels he can stick to his political guns on his political positions on issues such as immigration reform that aren’t popular with conservatives and his continued assertion that political parties must at least try and work together. Or will he pull a Mitt Romney and jettison past positions and insist he isn’t doing so when even a can of Hormel Chili in the shelves at Safeway would know he’s pandering to get primary votes. Talking with and compromising with the other side flies in the face of modern conservatives’ perception of governance as a strictly power-political game where those who try to compromise or at all reassure the opposition are wusses or political traitors and need to be purged form the party or be marginalized.

Prejudice? Not at all. Depends upon who you ask. Presidential scholars have been fairly consistent in appraisal of the GW Bush years - starting with the widely-read Sean Wilentz piece. Other polls have presidential favorites sliding around a bit, as public enthusiasm rises and falls. Consider: http://www.usnews.com/news/articles/2010/07/02/survey-ranks-obama-15th-best-president-bush-among-worst
So, the old adage about opinions is true.... You have yours, I have mine.
Miriam, http://www.usnews.com/news/special-reports/the-worst-presidents/slideshows/the-10-worst-presidents/1
Please, no more Bush candidates/presidents.
to enlighten younger readers who did not live through the two Bush presidencies. Bush Jr. (George W) ignored warnings in his own White House briefings that bin ladin planned to use planes to strike within the U.S. 911 should never have happened. He also ignored warnings that the levees in New Orleans needed to be shored up on an emergency basis as well as a warning from National Geographic that a category 5 hurricane was likely to strike that region. Perhaps we should require IQ tests of presidents; he was a C- student at Yale and probably only squeaked through at all due to his daddy's influence and money.During Katrina, he was in San Diego cracking jokes and playing the air guitar while people were drowning. He didn't even care enough to fly to Washington or New Orleans from here - instead he went to Arizona to cut a birthday cake for John McCain. Where was the rest of his administration? Condi Rice was shopping for shoes and Rumsfeld was watching a Padres game. They showed a callous disregard for human life that I found appalling -- and I was part of the press corp during Bush's visit here. He also started a war in Iraq based on lies - weapons of mass destruction that never existed, as the 10 Downing memos released proved. I interviewed Scott Ritter, a good Republican who served in the Reagan administration and was later the UN weapons inspector. He told me the Bush administration falsified his reports to justify starting that war, faking reports about weapons of mass destruction. He was so appalled he showed up at a Democratic convention to support the other party's candidates. The economy was also a mess during Bush's administration and he had the worse job creation record of any president in history. But hey, he was the guy people wanted to have a beer with...maybe that's not such a good criteria for choosing presidents. Many presidential scholars, nonpartisan, have actually ranked him the worst president ever.
time for some fresh air ........ the levies in New Orleans are a local issue and any problems are the result of the corrupt local government and had nothing to do with bush or the federal government. the governor and mayor both told the feds to stay away. I guess a weeks warning wasn't enough for the illiterate residents of New Orleans. Wars that almost every demoncrat including the clintons backed. Of course the smartest people on earth were fooled by the dumbest? Lies and distortions do not make history nor do they make for good comments. Poisoning the minds of the youth is a communist tactic. Nice to see you want to use it. no more bushes or clintons or any other family political line. lets tell the truth though and irrational opinions and lies.

The U.S. Army Corps of Engineers could have shored them up before the hurricane devastated the region. The Gov. and Mayor were not asking the feds to stay away prior to the storm. The fact that many people in New Orleans were poor or even illiterate does not mean it's okay for the federal government to turn a blind eye and do nothing but let the city drown when it could have been prevented. What was spent on recovery, repairs, etc. far exceeded what it would have cost to simply shore up the levies before the storm and prevent the loss of life, property, etc. Those are the facts. I was reporting on those issues at the time for a national news organization. The Bush administration's corruption and incompetence also extended to hiring a corporation with cronyism ties to Bush and a record of desecrating graves to handle the body count in New Orleans. I know this first hand because I was the reporter who uncovered the scandal. you can read about it here:

It is NOT bias on my part to suggest there is good reason to call Bush the worst president ever, but rather an educated opinion based on a mountain of evidence. Many other analysts have agreed with that assessment including impartial nonpartisan academic experts. My first-hand reporting found so much ineptitude, callousness, and outright disregard for human life and human decency that it turned my stomach, and should anyone's.