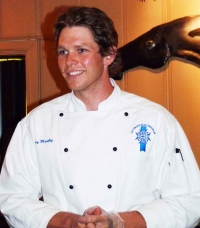 Jeremy’s on the Hill California-style Bistro

October 1, 2010 (Julian) – Not every Cordon Bleu-trained chef started his career at age ten. Nor does the typical chef run an acclaimed restaurant at age 23 or pedal past mountain lions on his way home from work. But Jeremy Manley has accomplished all of that and more, tempting patrons from all over to savor his creations at Jeremy’s on the Hill, a fine-dining establishment located between Santa Ysabel and the historic gold rush town of Julian.

"Chef Jeremy," as he's known, started cooking as a child--helping his Mom bake up creations in the kitchen of a bed and breakfast (formerly Angel's Landing, now Julian Meadow View Inn,  still operated by Teresa Manley in Julian). When the chef retired, Jeremy, 13, volunteered to fill his shoes. Then a famous chef came to visit.

“He couldn’t believe a 15-year-old kid had catered an entire wedding for 150 people,” Teresa Manley recalled. The guest invited Jeremy to attend a chef school. He later went on to graduate from the famed Cordon Bleu culinary institute in San Francisco—then came home to open up his own restaurant. 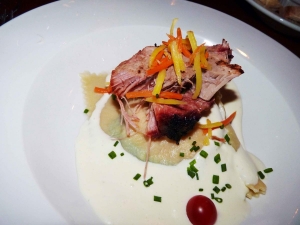 Chef Jeremy prides himself on using fresh, locally-produced ingredients and organic produce to cook up “farm to table cuisine.” He also gives back to the community. I had the delightful experience of sampling not one, but four different entrees at “Wine and Swine,” a special fundraising dinner to benefit Julian High School’s Future Farmers of America.

For our feast, Chef Jeremy paired locally produced white wines with four different pork dishes—all made from a pig raised humanely by local FFA members—as well as a sumptuous dessert made with apples, the crop that’s made Julian famous. (Check out the Julian Apple Festival this weekend, as the town caps off its year-long centennial celebration.) 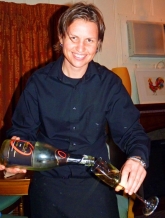 This hearty dish was swiftly followed by a cranberry and walnut-stuffed pork roulade with Indian Harvest rice and sage brown butter sauce. (Since I’m allergic to bleu cheese, a key ingredient, I had to suffer through watching my three companions relishing this beautifully-arrayed dish, which all assured me was fabulous. Instead, Chef Jeremy made a gnocchi dish for me with sun-dried tomatoes and eggplant, also wonderful. Our second course was paired with a Shadow Mountain muscat . Unlike most muscats, which are usually served as dessert wines, this muscat was less sweet and well-suited as an accompaniment for our savory main dishes.

At our table, the vote was divided: the women preferred the Shadow Mountain vintage, while the men enjoyed the light and unusual flavor of the Arneis of the first two wines poured. 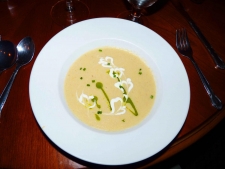 Next came a white corn soup with ham hocks, a crème fraiche and chive oil paired with Menghini chardonnay. The soup was flavorful. The wine, aged in stainless steel instead of oak, is intended to be served earlier and is less full-bodied than traditional oak-barrel aged wines.

My palate preferred the oak-aged Orfilla chardonnay served next, which had a richer, buttery flavor more akin to chardonnays that helped make the Napa Valley world-famous as a wine-growing region—a reputation East County’s backcountry is working to attain. 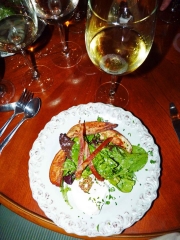 d egg salad with bacon lardons, fingerling potatoes and bacon vinaigrette along with whole grain mustard quinnell. Serving a salad at the end of the meal was an unusual choice—and welcome given that I don’t believe I could have made room for another hearty entrée!

We all, however, managed to finish off the grand finale—a deliciously flaky homemade peach-apple cobbler with carmel sauce and French vanilla ice cream, paired with an equally satisfying Orfila sparkling moscato bianco.

Located in a converted house, Jeremy’s features fireside dining and in good weather, outdoor patio dining along with a wine, champagne a 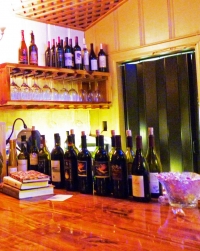 nd beer bar. There is also a private banquet room. The regular menu features steaks, seafood, pork and chicken dishes for dinner, as well as lunches that include sandwiches and the popular bison burgers.

If you dine at Jeremy’s, I highly recommend spending the night at Julian Meadow View Inn. The inn’s rustic charm and woodsy location provide an idyllic retreat from the hustle and bustle of life in the city. We saw deer, squirrels, flocks of wild turkeys, blue jays and a spectacular sunset over the mountain during our brief stay in our knotty-pine planked room with balcony. Mid-week specials start at just $49.99, or $59.99 for a room with electric fireplace and whirlpool tub at this little piece of heaven.

Inn guests receive discounts at Jeremy’s – or better yet, use our special discount coupon for readers of East County Magazine (scroll down to bottom of article for coupon).

After our feast, Jeremy doffed his apron and doubled as shuttle driver for this special occasion, 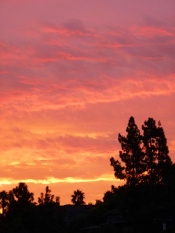 driving guests back to the inn. He has sometimes ridden his bicycle along a winding back road to his home in Julian, through an area frequented by mountain lions. “One night I was pedaling home and heard a growl, and thought, `oh no!” he recalled. Thankfully, our chef did not become an entrée for the lion.

Reservations are highly suggested at Jeremy’s, which is open seven days a week from 11 a.m. to 4 p.m. for lunch; dinners are served from 4 to 8 p.m. weeknights ; on Fridays and Saturdays dinner is from 4 p.m. to 8 p.m. , when live piano music is provided. There’s also a champagne brunch on Sundays and live piano entertainment.

Jeremy’s is definitely on my list of favorite fine dining establishments anywhere. It’s worth a trip to East County’s backcountry for a memorable dining experience at Jeremy’s on the Hill California-style Bistro.  Bon appetit!