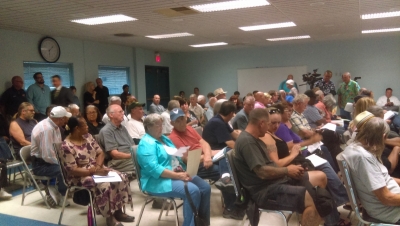 October 19, 2016 (Lemon Grove) -- At prior meetings citizens have voiced concerns over marijuana. But at last night’s Lemon Grove City Council meeting, instead of pot they were talking about potholes.  Council also heard arguments that the city lacked priorities when it passed a Welcoming Cities Resolution.  The resolution was modeled after a White House initiative to help newcomers by assisting refugees and immigrants integrate into communities.

Three television stations including ABC, came to Tuesday’s meeting in a park building where the Council holds meetings not usually graced by TV crews.

Earl Hennon, a retired Navy veteran, member of the VFW and Lemon Grove homeowner, claims he was pulled over by a police officer on suspicion of drunk driving after swerving to avoid a series of potholes. He questioned the wisdom of a Welcoming City Resolution amid such problems. He then testified he saw a Muslim man hit his wife for asking a question, at which point he said he threatened to take the man outside if it happened again.

Mayor Mary Sessom tried to assure detractors of the resolution that they were in no immediate danger of an influx of immigrants other than those who already have family here, and that the federal government would consult with city leaders in a relocation project of significant scale.

Sessom called a five-minute recess as the crowd yelled at her while she responded to Paul Gomez’ complained about a recent low income housing development and having only two Sheriff deputies in Lemon Grove. She replied that the new development was market rate and the City had no plans to demolish an area from the recent housing facility to the Home Depot. She was met with shouts of “Liar!” and other such condemnations, at which point she called one of three recesses. 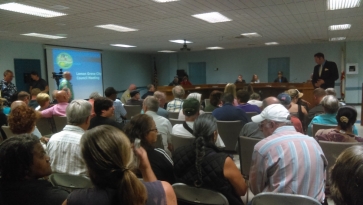 When she called for a five-minute recess, San Diego County Sheriff deputies would intercede and tell citizens not to yell derogatory things at the Mayor from the floor unless it was their turn to give public testimony, and then the meeting would resume.

Rev. Wayne Briggs approached and said “I would like to commend this Council for the action. Lemon Grove, that’s a very welcoming sound.  I think of the number of young entrepreneurs who have been inspired by having a lemonade stand. You stop and enjoy that lemonade. That’s what this resolution says, we have a city here that offers you a cool and refreshing place to live.” He denounced as “deplorable” hatred targeting people “we don’t even know” and emphasized that America promises liberty and justice for all.

The Imam of the Islamic Center for San Diego, who came here as an asylum seeker in 2004, said he felt welcomed by leaders of all faiths and that he has given back to the community here, such as helping the homeless and hungry. “Muslims have been contributing for decades to the betterment of this country, just like everyone else.

Another speaker stated, “Lemon Grove is a welcoming city. It is a beautiful city. It is a gem. I would just caution the Council to take a look at the other issues that are really there…I like to see diversity in our community, it’s beautiful. Address potholes, crime, homelessness. I want Lemon Grove to thrive. I think diversity is a great thing, but let’s focus on the other issues. Yes, let’s be welcoming, let’s have open doors. But let’s fix Lemon Grove before we can take on more.”

But those hoping for a repeal of the Welcoming Cities Resolution lost a key ally, the lone Republican on the Lemon Grove City Council Jerry Jones, who said “I didn’t vote for it. I probably would have voted no or abstained, but I’ll be damned if I vote to repeal it.”

Jones cited his time as School Board member, when he was ashamed that it took a court lawsuit decades ago to keep Lemon Grove educators from sticking Mexican kids in barns instead of classrooms, in prefacing his decision to oppose repeal of the Welcoming Cities Resolution.

Following threats made to Sessom’s family via Facebook, she has promised to add a repeal to the Welcoming Cities Resolution to a future council agenda.

“Lemon Grove has not taken any position on federal policy. We don’t have a position on immigration. We passed a resolution last spring that welcomes refugees and welcomes immigrants,” said Councilman George Gastil, one of two candidates running for Mayor since Mayor Sessom is retiring.

Mayor Sessom changed the order of business, moving public comments unrelated to the agenda to the end of the meeting. “There are some people here on City business who I need to prioritize,” she stated.

At the end of the meeting, Sessom assured Council that she receives four times more emails than they do and that she responds to every single one of them.

Earlier in the meeting, residents voiced concerns that Connect Main Street, a walkable urban corridor through the heart of the Lemon Grove would increase the number of transients, among other issues.

“When you put in a park, you’re putting in a transient camp,” said one man.

Jim Stout testified “I looked over the proposal. I think it’s a good idea but I do have concerns because I live on Main Street and on my street- the changes, if it’s done the way it is now, there’s no lighting. It’s very dark. For public safety I just didn’t see in the proposal where there would be street lighting.”

Councilwoman Jennifer Mendoza remarked that not only did she see lighting in this project, but it was even lighting designed to minimize light pollution.

An audience member asked who would pay for the project.  Jones replied, ”This segment is being paid for by SANDAG" one of two grants approved by the City Council Tuesday, along with the latest portion of Connect Main Street on 4-0 votes, with Councilmember Racquel Vasquez absent.

Jones offered his assigned task of being a liaison to water management agencies and METRO to the other Councilmembers of the Council meeting.  The other Councilmembers gave a hearty laugh.  Having to be the bearer of bad news on recent water rate hikes was a true sacrifice performed by someone with political aspirations, such as re-election.

An announcement was made that the new Heartland Fire Chief, Collin Stallwell, will start his duties on November 7th.

No one was there to comment on Proposition V, the initiative to legalize and regulate medical marijuana dispensaries, for the first time in some time, but the Mayor notified those present that the East County Chamber of Commerce had changed its recommendation from support to oppose.