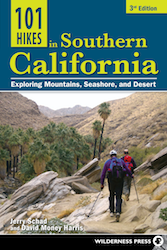 September 5, 2013 (San Diego’s East County) – In 2011, the SoCal outdoor community lost Jerry Schad, the seasoned hiker who spread his appreciation for the outdoors throughout the San Diego region through his popular books and photographs.

Now Wilderness Press has released the first update to Schad's classic 101 Hikes in Southern California since his passing two years ago. The first edition was published in 1996.

David Money Harris – fellow outdoor writer, hiking leader, and frequent collaborator with Schad – took on this most recent update with Jerry's legacy in mind. Harris worked with Schad on the 2005 revision to the work, and has contributed to Schad's popular Afoot & Afield series.

"Unequaled in his knowledge of the region's wild places," Harris explains, "I have endeavored to retain Jerry's lively writing and insightful descriptions while reflecting recent changes."

To compile this information, Harris personally hiked all of what totals roughly 600 miles of trail to ensure the guide's up-to-date accuracy.

Jerry Schad (1949-2011) was Southern California's leading outdoors writer. His 16 guidebooks, including the popular Afoot & Afield series, and his "Roam-O-Rama" column in the San Diego Reader have helped thousands of hikers discover the region's diverse wild places. His sudden and untimely death from kidney cancer shocked and saddened the community.

David Money Harris is the author and coauthor of five hiking guidebooks and four engineering textbooks. As a Sierra Club trip leader, he organized mountaineering trips throughout the Sierra Nevada. Since 1999, he has been exploring the mountains and deserts of Southern California.

The new revision to this staple of SoCal hiking is available for purchase now. For more information visit www.wildernesspress.com.